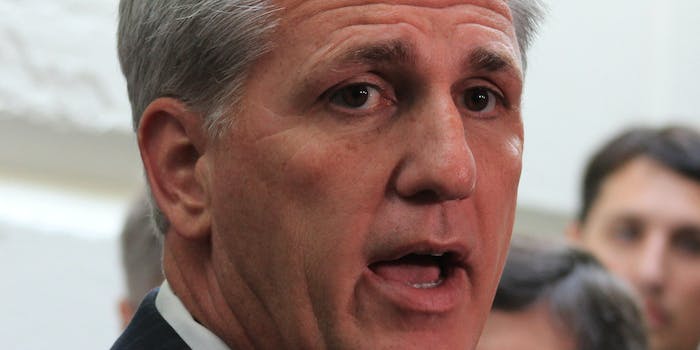 ‘Dude you voted no on all voting rights bills’: Top Republican criticized for MLK Day tweet

People are calling him hypocritical.

House Minority Leader Kevin McCarthy (R-Calif.) is getting dragged on Twitter after he tweeted about Martin Luther King Jr., reflecting on the civil rights leader’s resilience and his commitment to liberation.

“From the halls of Ebenezer Baptist Church to the steps of the Lincoln Memorial, #MLK spent his life spreading what he called ‘the gospel of freedom.’ He never gave up and never preached hate,” McCarthy wrote on Monday morning as the nation observed MLK Day.

“His words and example inspire us today as we celebrate a great American on #MLKDay,” he added in the tweet.

Given McCarthy’s record on a number of issues, many people criticized McCarthy for evoking the civil rights icon. Specifically, many expressed their anger about this tweet and how it directly contradicts his actions.

McCarthy and the rest of the Republican party in the House of Representatives voted against the John Lewis Voting Rights Advancement Act. While it passed the House in August because of a Democratic majority in the chamber, the bill is languishing in the Senate.

McCarthy’s no vote on the bill was immediately brought up in response to his tweet.

“Dude you voted no on all voting rights bills,” one Twitter user wrote.

“All you’ve done is fight against a voting bill that would make things more equal… you’re a fake, sick man. Disgusting,” another user wrote in part.

Other users brought up McCarthy’s opposition to the results of the 2020 election that voted in President Joe Biden. Prior to the election, McCarthy heavily opposed Democrats’ push for mail-in voting to ease risks during the pandemic—an effort he called “disgusting,” alleging that it politicized the pandemic.

He seemed oblivious to the fact that requiring people to vote in person, and showing up in locations en masse was in itself a public health issue during a pandemic that would be exacerbated by mass gatherings.

Given this context, people weren’t taking kindly to his remarks, with some calling it hypocritical.

“They love to quote #MLK, but don’t want to stand in unity to end voter suppression,” wrote one user.

“His miserable party @gop has done nothing but damage to ‘the gospel of freedom,'” wrote another user.

“If he was so inspiring, why not prove it,” commented another user.

McCarthy has since tried to backtrack on his stance on elections and claimed to a CNN journalist in March that any insinuation that he tried to overturn the election result was “not true.”

His tweet hit an especially sore point because of McCarthy’s relentless opposition to the teaching of critical race theory across schools, which would incorporate into the syllabus lessons on how the issue of race shapes the country’s politics and systems.

He has even tried to quote MLK to substantiate his claims, which King’s daughter Dr. Bernice King has pushed back against.

“You don’t get to exploit the memory of Dr. King for your political purposes while you and @GOP work to deprive Black people of their #VotingRights,” wrote one user.

As of Monday afternoon, McCarthy’s tweet was in the midst of being ratioed, with it getting more than 2,700 comments compare to just over 1,000 likes.