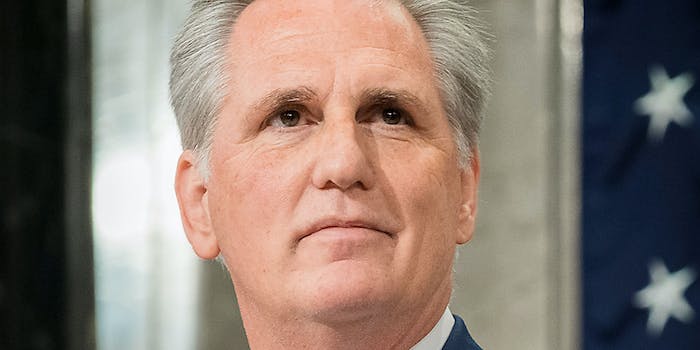 'With McCarthy, it's Build Back Later.'

This morning, the House passed the Build Back Better Act. The legislation focused on “human infrastructure,” such as child care, prescription drug prices, housing, and the environment.

In an attempt to thwart the legislation, Republicans fell back on filibustering. Minority Leader Kevin McCarthy (R-Calif.) spoke for eight-and-a-half hours from last night into the early hours of the morning. His speech broke a record set by Speaker Nancy Pelosi (D-Calif) in 2018, when she spoke for eight hours and seven minutes in an attempt to persuade Republicans to protect the “Dreamers”—undocumented immigrants brought to the United States as children.

Many observers suggested McCarthy’s speech also broke the record for being the most “incoherent,” “boring,” “unhinged” ramble in the history of Congress.

“Kevin McCarthy promised he would give us all his wisdom about government. At 11:30 pm, I don’t know how much wiser we are but we are definitely older,” Raskin tweeted.

“We are hearing rumors that the front row of GOP hostages behind Kevin McCarthy are asking whether they can just be censured instead,” Raskin added later.

Other Democrats got in on the fun, flooding Twitter with jokes and memes.

“Could we be witnessing the world’s first two-hour-long minute? What’s the record? Any congressional historians out there?” Rep. Andy Levin (D-Mich.) asked.

“Sorry, but who is this man and why is he yelling so much?” White House staffer Mike Gwin tweeted.

Pelosi took the mockery even further. Last night, she posted a blog on the newsroom portion of her official website entitled, “Is Kevin McCarthy OK?”

The blog included a compilation of reporters’ tweets about McCarthy’s speech.

Pelosi’s blog concluded, “As he hopefully approaches the end, we’re all left wondering: does Kevin McCarthy know where he is right now?”

The Build Back Better Act now heads to the Democrat-controlled Senate, which is expected to circumvent the filibuster by passing it as a reconciliation bill.