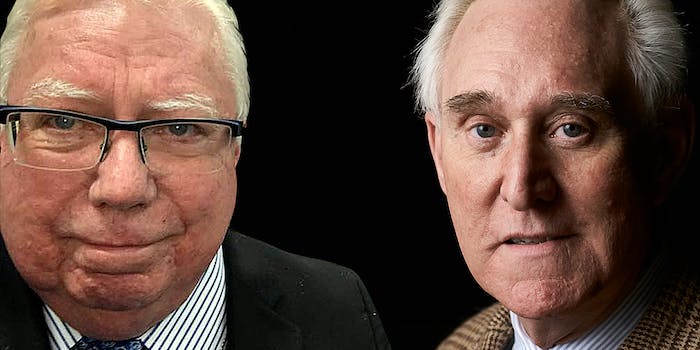 The spotlight has shifted to the Trump campaign.

Jerome Corsi was reportedly lying when he told his fans over at InfoWars that Russian hackers weren’t behind the theft of Democratic emails, but that a murdered DNC employee was.

An email by Corsi from 2016—between Corsi and Trump affiliate Roger Stone—reveals that Corsi was fully aware that Russian hackers were indeed behind the stolen emails, rather than DNC staffer Seth Rich.

Corsi shared his plea deal with Special Counsel Robert Mueller, and in an email to Stone, Corsi wrote “That appears to be the game hackers are now about. Would not hurt to start suggesting HRC old, memory bad, has stroke.”

Back in August 2016, Stone’s tweet about Rich having “ties to DNC heist,” gave traction to the untrue narrative that Rich was murdered over the theft of the emails, the Daily Beast reports.

In the following months, Corsi doubled down on the theory despite pleas from Rich’s family to desist. The conspiracy theories escalated in part due to a three-part InfoWars series in which Corsi claimed Rich’s murder was ordered by Hillary Clinton, which ran in 2018.

I will be joining Jason Goodman on his Live Stream broadcast today SETH RICH- Witness Prepared to Identify Two Killers of Seth Rich at Tuesday press conference at 1:00PM at the HOLIDAY INN Rosslyn Key Bridge in DC — I will join Jason by SKYPE – please watch CROWDSOURCE THE TRUTH pic.twitter.com/KJ2Em3AyMh

Rich was murdered in what police deemed was a failed robbery on July 10, 2016. The emails, released by WikiLeaks beginning on July 22, 2016, days before the Democratic National Convention began, were massively damaging to the Clinton campaign.