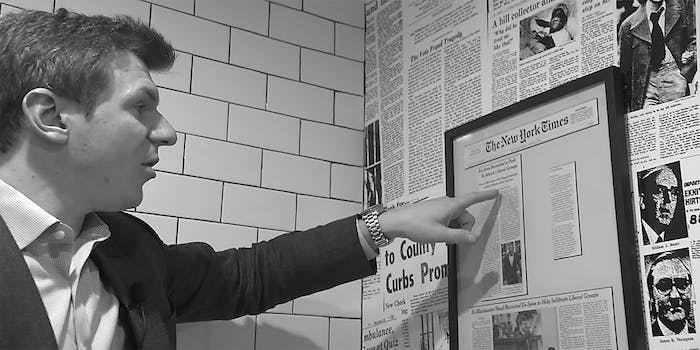 This is so confusing.

This morning, James O’Keefe, the head of Project Veritas, released a video that says the New York Times‘ Adam Goldman was working on a piece about the right-wing organization known for its dubious stories and just as dubious credibility.

And now possibly known for its dubious understanding of best shitting practices.

In the video, O’Keefe goes after Goldman’s credibility, saying that he had to once update the age of a person in a story about Project Veritas. Because it happened in the New York Times, journalism’s most treasured institution, he hung it in the bathroom.

So, O’Keefe explains, you can see it when you poop.

The video raises more questions than it answers. Sure, they’re saying the Times is shit. But the correction is hung above the toilet. You can see it when you pee, if you’re standing, but if you’re shitting, you can’t.

O’Keefe could have very easily hung it on the door, so you could see it when using the toilet the way it is typically used.

But he hung it above the toilet, so, and this is a quote: “When you take a poop, you can see the update.”

He doesn’t say before you poop. Or after you poop. O’Keefe, who loves to hang on little innocuous details to try and prove a larger point that he probably doesn’t have actual proof to back up, says “when.”

This raises a question that must be asked: Do employees at Project Veritas poop backward? Straddling the toilet with the chest to the tank?

We can only guess.