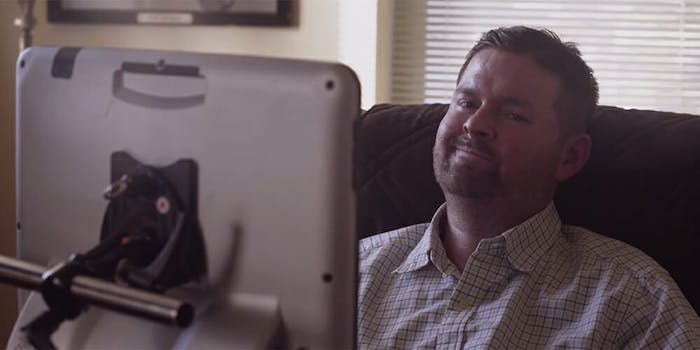 Watch the founder of the ice bucket challenge regain his voice

Pat Quinn regained his voice with the help of new technology.

ALS attacks and destroys the nerves that control voluntary muscle movement, slowly paralyzing the body. Loss of the ability to speak is a frequent symptom of the disease, but thanks to an initiative called Project Revoice, Quinn has “regained” his voice.

Quinn lost his speaking abilities in 2017, which forced him to use computer-generated audio to share his thoughts (akin to Stephen Hawking). But in a partnership with Canadian software company Lyrebird, Project Revoice used two to three hours of audio samples of Quinn’s voice recreate his unique voice tonality. Because he didn’t sit down and record his voice before it was gone, the Project Revoice team combed the internet to collect video and audio of him speaking.

You can watch Project Revoice’s video on Quinn’s moving journey below.

Quinn founded the ice bucket challenge back in 2014. While the viral videos, which featured people pouring giant buckets of ice-filled water over their heads, had their share of critics, in the years since the challenge gained notoriety we’ve seen a number of positive outcomes.

Funding from the ice bucket challenge helped researchers discover a new gene related to the rare disease. Researchers at Johns Hopkins University also credit ice bucket challenge-related funding for their ability to make a breakthrough in understanding how the disease works—and how it could potentially be defeated.

Later this year, Project Revoice will begin a “voice bank” where participants can record and store their voice and will start its “voice cloning” services by the end of 2018. Right now, the organization is trying to raise awareness of Quinn’s story so that those with ALS can know that they have options for restoring their voice, even when their ability to speak is gone.