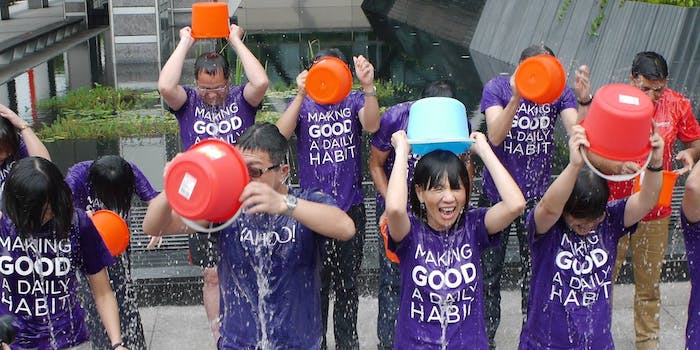 Another big discovery in ALS research, sponsored in part by viral videos.

If you ever doubted the power of the internet to enact change, doubt no more. On July 25, the ALS Association announced that researchers have identified a new gene, NEK1, which is one of the most common genes that contribute to the neurodegenerative disease ALS.

A press release issued by the ALS Association notes that funding for this research came largely from donations raised by the 2014 viral ice bucket challenge, in which people posted videos of themselves dumping buckets of ice water on their heads as a way to raise awareness for the disease. People who did the water-dumping were then asked to tag others on social media who had 24 hours to do the same or donate.

According to the ALS Association the challenge raised $220 million for research over the last two years—money that has been the catalyst behind two groundbreaking discoveries.

The first came last year, when researchers at Johns Hopkins University were able to discover why the protein TDP-43 forms clumps in the brains of people affected by ALS.

The second, the discovery of the gene NEK1, is now being heralded as a huge leap forward in the effort to end ALS. The project was supported by the ALS Association through funds given to Project MinE, an international effort to sequence the genomes of people with ALS. According to Lucie Bruijn of the ALS Association:

The discovery of NEK1 highlights the value of “big data” in ALS research. The sophisticated gene analysis that led to this finding was only possible because of the large number of ALS samples available. The ALS Ice Bucket Challenge enabled The ALS Association to invest in Project MinE’s work to create large biorepositories of ALS biosamples that are designed to allow exactly this kind of research and to produce exactly this kind of result.