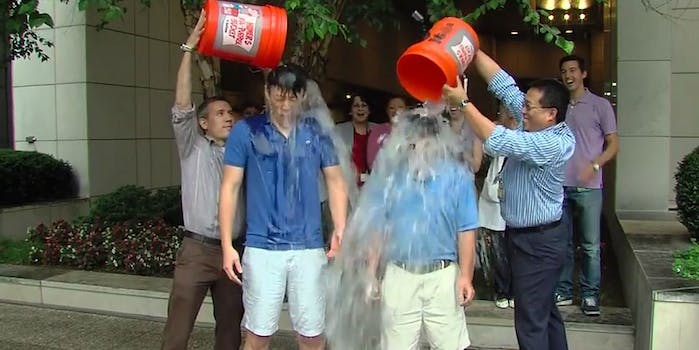 'The money came at a critical time when we needed it.'

It looks like all those ice bucket challenges in the name of ALS research last year actually produced something tangible. And according to two researchers from Johns Hopkins, they’ve managed a big breakthrough in the fight to potentially halt the debilitating disease.

As described by researcher Jonathan Ling—a graduate student in the lab of professor Philip Wong—researchers could not determine why protein TDP-43 clumps inside the brain and what it was supposed to be doing in the first place.

Here’s what the Johns Hopkins researchers found, according to the school: “Researchers say TDP-43 is normally responsible for keeping unwanted stretches of the genetic material RNA, called cryptic exons, from being used by nerve cells to make proteins. When TDP-43 bunches up inside those cells, it malfunctions, lifting the brakes on cryptic exons and causing a cascade of events that kills brain or spinal cord cells.”

But as Ling says in the video, there is good news: “The best part is, it can be fixed. With any luck, this can lead to possibly a cure or slowing down this terrible disease.”

Researchers have discovered that an estimated 97 percent of people suffering from ALS were found to have those TDP-43 clumps inside brain or nerve cells. Even though the people currently suffering from ALS might not get to see the benefits of this research, this is certainly an announcement that should give hope to the future of humanity.

And much of it had to do with the people who took the ice bucket challenge, which reportedly helped raise $220 million for ALS research.

“Without it, we wouldn’t have been able to come out with the studies as quickly as we did,” Wong said, via the Washington Post. “The funding from the ice bucket is just a component of the whole—in part, it facilitated our effort. …The money came at a critical time when we needed it.”

As Johns Hopkins points out, the ALS Association says as many as 30,000 Americans are living with ALS with more than 5,000 people are newly diagnosed each year.