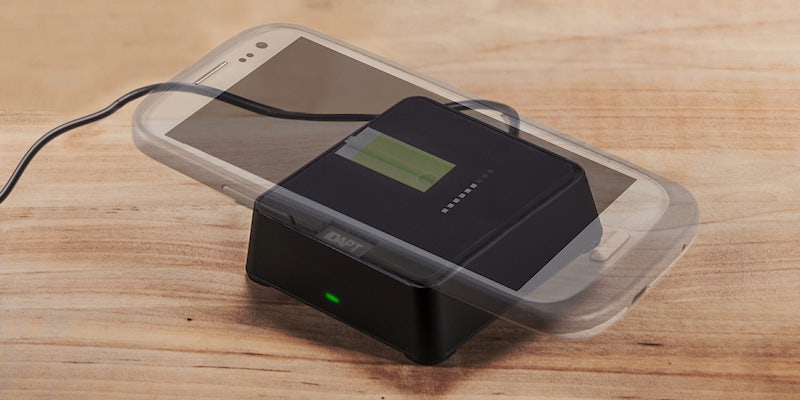 The shocking history of wireless charging

Wireless charging may seem like a new idea, but it's existed for decades.

Wireless charging may seem like newfangled techy magic, but it’s not. The technology that allows devices to charge without being plugged in actually turned 130 this year, and it’s never been more useful. Today, wireless charging technology allows us to cut the cord with a variety of devices, and eventually, we’ll rarely have to plug-in. Early buyers of the iPhone X and 8 have been using wireless charging capabilities since September, while many Samsung and Google phone users have been chilling on charging ports for years. But as you’ve drifted off to sleep while your phone rests on a Qi, maybe you’ve wondered, how does wireless charging work? To answer that, we’ll have to go back to 1890s New York City.

The history of wireless charging

Between 1888 and 1906, Nikola Tesla spent most of his time and fortune on a series of projects to develop the transmission of electrical power without wires. New York City had just installed the world’s first electric power grid in 1886, and it only served the Lower East Side. Tesla had a far grander vision.

He believed wireless power was probable, and he built something called a “Tesla Tower,” which is a giant coil connected to a 200-feet-high tower with a ball three feet in diameter. Tesla pumped 300 kilowatts of power into the device, and the coil resonated at 150 kilohertz. The Tesla coil worked by converting low-voltage alternating current electricity to very high voltage and increases the frequency. His prototype, which is enormous and cost him a great deal, worked in his lab. But when it came to functioning on a grander, outdoor scale, the experiment failed: The power diffused in all directions, and Tesla had no way of containing it to get the coil to focus its power.

Tesla’s Tesla coil prototype, below, has been on display at the Griffith Observatory since 1937, and it’s awesome. Watch how it powers the neon sign without any wires or cords. If you can imagine it, this is what is being done to charge your smartphone wirelessly, but on a much smaller and quieter scale.

Though many other inroads to wireless charging happened in the following century, none of the other ideas had the strength and power of Tesla’s coil.

How does wireless charging work today?

The basic principle of wireless, or inductive charging, is electromagnetic fields that transfer the energy from one place to another. This is called electromagnetic induction. Basically, a copper coil creates an oscillating magnetic field that can travel wirelessly, and a second coil converts the floating field back into energy again. The two coils form a transformer, or a device that transfers energy between two circuits.

There’s a second method, called “magnetic resonance,” which enables power transmission at greater distances between transmitter and receiver and increases efficiency by changing how much energy can be stored in each coil and coil size. The bigger the coil and the more coils there are, the greater distance a charge can travel. Magnetic resonance is important because it really cuts the cord. It also allows for multiple devices to be charged using one set of coils.

In the Tesla coil, that giant, hulking device was several feet from the neon sign it powered. The sign wasn’t sitting on a “powermat.” But in wireless charging pads, the coils are tiny—only a few inches in diameter—which limits the distance the power can travel.

In 2006, researchers at MIT, who later formed a startup, WiTricity, were able to prove that they could transfer electricity at a distance of two meters using the magnetic resonance method. Though 60 percent of the power was lost during this initial transfer, their experiments enticed investors like Toyota and robotics companies. Today, WiTricity is still working to make long-distance wireless charging possible. Thus, the magnetic resonance method remains popular.

The battle for wireless charging standards

These two differing methods of wireless charging have come into play recently as big-name smartphone companies choose which tech to adopt. The Qi Standard (pronounced “chee”) uses the inductive charging method of small coils and short distances. Created by the Wireless Power Consortium, a partnership of over 200 companies including Apple and Samsung, the Qi Standard leaped ahead in wireless power adoption when Apple announced the X and 8 would be compatible.

Airfuel, which focuses on electromagnetic resonance, is in second place. Previously known as Power Matters Alliance, Airfuel was adopted by big brands earlier on like Duracell, Starbucks, and Google. The issue here is that, if you have an Airfuel compatible phone, you probably can’t use a Qi charging mat.

WiTricity is also in the race for adoption but on a different level. Today, it’s focusing on standardizing wireless charging for electric cars.

The pros and cons of wireless charging

Chargers are frustrating cords that have to be carried around, and plopping your phone on a mat or piece of IKEA furniture is way easier. But you can’t really use your phone while it charges. You have to let it be, which is hard for our phone-addicted culture. Also, the Qi Standard is currently slower than just using a regular dongle to charge your phone. The biggest gag of wireless charging: the mat you charge devices on still has to be plugged in.

The most optimistic innovation in wireless charging is the Pi Charger, set to be released this year. By releasing “weak electromagnetic fields,” the charger will give your battery juice as soon as you are in the same room as it.

The future of wireless charging

Still, Kesler estimates that by 2025, over 2 billion devices a year will ship with wireless charging. And new startups hope to make the transition from dealing with dongles to a wire-free future seamless. California-based Energous is working on ways to make Wi-Fi charging a reality. The company hopes to release their at-home transmitters by mid-2018, but prices and compatibility information have not been released.

Correction: AirFuel was previously known as Power Matters Alliance, and Powermat was one of its member companies.