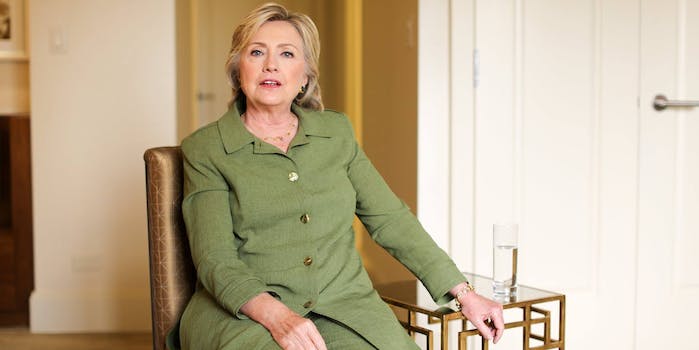 'I know that I can be perceived as aloof or cold or unemotional.'

Hillary Clinton may have just shown more of her real self in a Facebook post than at any other point in the 2016 election.

Speaking with Humans of New York photographer Brandon Stanton, the Democratic presidential nominee recalled a story from her law school days in which she was heckled by male students before a big exam. This experience, she said, was part of what taught her to “control my emotions.”

“I know that I can be perceived as aloof or cold or unemotional. But I had to learn as a young woman to control my emotions. And that’s a hard path to walk,” Clinton said. “Because you need to protect yourself, you need to keep steady, but at the same time you don’t want to seem ‘walled off.’ And sometimes I think I come across more in the ‘walled off’ arena.”

The perception that Clinton is “walled off” has become one of the defining traits of her candidacy, one that has allowed major issues—her use of a private email setup as secretary of state, concerns over the Clinton Foundation—to help define her as a historically unfavorable candidate.

Former President Bill Clinton, her husband, attempted to counter this image in a sweeping—some might say rambling—speech at the Democratic National Convention, during which he took America through Clinton’s decades-long career as a public servant.

As for Stanton, commenters on the Clinton post have expressed their outrage at his partisanship. But that should come as no surprise: Back in March, Stanton penned an open letter to Donald Trump, Clinton’s Republican opponent, condemning him for telling “racist lies” and “gleefully tell stories of executing Muslims with bullets dipped in pig blood.”

Will a short post on Facebook crack Clinton’s image as a calculating political maneuverer? Maybe. But if the polls are any indication, it’s going to take a lot more than that.