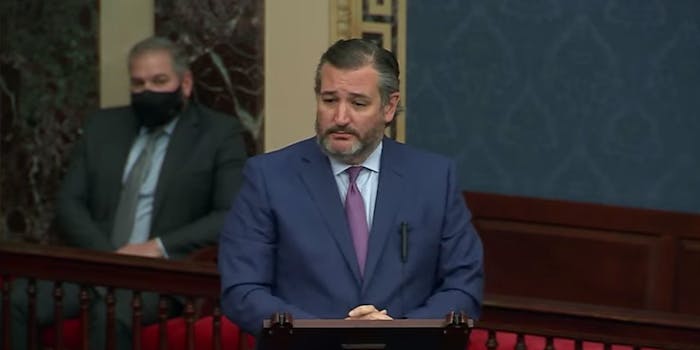 After months of whipping Trump fans into a frenzy, far-right figures ask the mob to remain calm.

Prominent far-right figures who spent months whipping supporters of President Donald Trump into a frenzy with debunked claims of widespread voter fraud are now begging their followers to stop rioting in Washington, D.C.

Thousands of the president’s supporters stormed the U.S. Capitol building on Wednesday after attending the “Save America Rally” in which Trump repeatedly and falsely claimed that the election had been stolen.

Taking the president’s advice to fight back against the perceived injustice, Trump’s fans, who were initially convinced that the president would serve a second term thanks to conspiracy theories online, broke down police barricades before breaching the U.S. Capitol building.

Police were eventually forced to use tear gas inside, causing legislators to reportedly don gas masks as protesters broke into the Senate chambers.

As the seriousness of the situation became clear, right-wing voices suddenly began urging the president’s rabid base to stand down.

Charlie Kirk, one of the president’s most vocal supporters, argued that the actions were not indicative of a peaceful protest.

“Our side shouldn’t act like ANTIFA,” Kirk tweeted. “If these reports are true of what’s happening at the Capitol, it is no way to protest, no matter who is doing it.”

Katie Pavlich, another prominent right-wing figure, called on Trump to denounce the riot.

“President Trump must come out now and ask supporters not to storm the Capitol or fight police,” she tweeted. Keeping the march peaceful in its entirety is essential.”

Despite her pleas, the majority of Trump supporters appeared to support the effort. After throwing more fuel on the fire, the president eventually joined in and called on his fans to “stay peaceful.”

“Please support our Capitol Police and Law Enforcement,” Trump said. “They are truly on the side of our Country. Stay peaceful!”

But after four years of riling up his base, Trump’s words appeared to fall on deaf ears.

Still, the president’s biggest cheerleaders attempted to reverse the chaos.

“I understand there is anger,” she said. “But violence is not the answer.”

Even the president’s son weighed in after similarly hyping up the crowd with false claims of voter fraud just hours prior.

“This is wrong and not who we are. Be peaceful and use your 1st Amendment rights, but don’t start acting like the other side,” Trump Jr. said. “We have a country to save and this doesn’t help anyone.”

One of the president’s most loyal defenders, Sen. Ted Cruz (R-Texas) likewise attempted to denounce the violence.

“Violence is always unacceptable. Even when passions run high. Anyone engaged in violence—especially against law enforcement—should be fully prosecuted,” Cruz said. “God bless the Capitol Police and the honorable men & women of law enforcement who show great courage keeping all of us safe.”