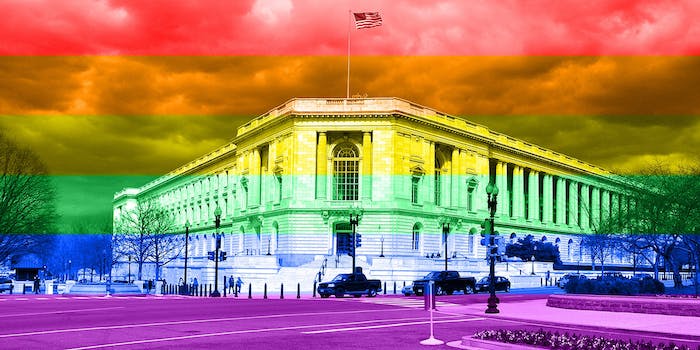 Civil rights 2.0: What the Equality Act of 2015 means for LGBT Americans

It's the most sweeping anti-discrimination law for LGBT people ever proposed.

A new bill could fundamentally change what it means to be gay, lesbian, bisexual, or transgender in America.

The Equality Act of 2015 covers eight major areas of discrimination law under which LGBT people are currently not federally protected: public accommodations, public education, employment, housing, federal funding, jury service, legal protections, and credit. The bill would amend the 1964 Civil Rights Act to include sexual orientation and gender identity among the other protected classes.

Additionally, the bill mandates that all sex-segregated facilities (such as bathrooms and dressing rooms) be accessible to people based on their gender identity. And perhaps most importantly, the Equality Act includes a clarification that states the federal Religious Freedom Restoration Act (RFRA) cannot be used to discrimination against LGBT people.

“We need a uniform federal standard that protects all LGBT Americans from discrimination.”

“It’s time to act,” Merkely said in a statement to the Daily Dot.

“Most Americans are shocked to discover that many LGBT Americans can be denied a job, a room in a hotel, a seat at a restaurant, a place in school, equal access to credit, or housing because they still lack explicit federal protections from discrimination,” Merkely said. “And once people learn that, they overwhelmingly support the basic idea that LGBT Americans should be judged only on their merits, just like everyone else.”

Legislation of this kind has long been considered a necessity among LGBT civil-rights groups. While progress has spread in areas like marriage and voter support for LGBT rights, the majority of U.S. states still lack vital civil-rights protections that apply to lesbian, gay, bisexual, and transgender people.

“In most states, a same-sex couple can get married on Saturday, post pictures on Facebook on Sunday, and then risk being fired from their job or kicked out of their apartment on Monday,” wrote Cicilline in a “Dear Colleague” lobbying letter obtained by the Daily Dot. The letter was circulated this week on Capitol Hill in an effort to gain support for the Equality Act.

“A majority of states in our country do not have laws that protect LGBT individuals against discrimination,” wrote Cicilline, who was elected to both Congress and a previous mayoral race as an openly gay politician. “In fact, some states have considered or even passed legislation that would authorize discrimination against LGBT Americans. We need a uniform federal standard that protects all LGBT Americans from discrimination.”

Previous efforts to pass legislation protecting the civil rights of LGBT Americans have failed—with the roller-coaster ride of the Employment Non-Discrimination Act (ENDA) serving as a warning. ENDA, introduced year after year in Congress from 1974 onward, is a specter of failure haunting the LGBT civil-rights legislation effort. Mostly recently, Merkely reintroduced ENDA in 2013. The Senate passed the bill, but it then floated aimlessly until advocates gave up on it in 2014.

The question remains: If a simple bill addressing employment rights couldn’t pass after decades of attempts, what faith can voters have in a sweeping piece of legislation that essentially expands ENDA into eight different areas?

Greg Nevins, a Georgia-based attorney for Lambda Legal, said that the legislative process is too complicated to base one bill’s success on another’s failures.

“There’s not one handy answer for each time that a bill failed,” Nevins told the Daily Dot. “It could be that there were more pressing concerns. In 2010, Don’t Ask Don’t Tell was the priority. It’s often a matter of choosing one over the other.”

Nevins points to the recent ruling by the Equal Employment Opportunity Commission (EEOC), which clarified that anti-LGBT workplace discrimination is actually a form of gender discrimination and thus protected by existing federal law. Ironically, the ruling came after LGBT advocates finally gave up on efforts to pass ENDA. But as Nevins wrote in an explanation of the ruling posted to the Lambda Legal site, a commission ruling is not the same as a federal law.

“[The EEOC ruling] it is both well-reasoned and thorough, but that it also has yet to be adopted by the federal courts,” Nevins wrote. “Then comes the bottom line: Employers could discriminate on the basis of sexual orientation and then argue in court that Title VII [the applicable law] lets them do so, but it would be risky. Given the obvious logic the EEOC has laid out, such employers might well lose in court.”

No better time than the present

The Equality Act has the advantage of timeliness. After the Supreme Court gave same-sex couples the right to marry this June, the public’s attention was turned to other discrimination issues even as marriage equality was being celebrated.

At a July closing gala for Freedom to Marry, Vice President Joe Biden told the crowd: “There are still 32 states where marriage can be recognized in the morning and you can be fired in the afternoon. This next door is going to be a hell of a lot easier to push open as long as we expose to average Americans [to] the injustice that continues to exist.”

But even though the Equality Act is undeniably the most sweeping LGBT civil rights legislation to ever be proposed, not everyone is happy with its approach.

“The Equality Act may not pass tomorrow or even in the current Congress, but you have to start somewhere.”

“The bill potentially gives license to chip away at the Civil Rights Act,” said GetEqual co-director Heather Cronk. Opening the 1964 landmark anti-discrimination bill to amendments, Cronk said, could be dangerous when faced with an already increasing slew of right-wing attempts to pass increasingly discriminatory laws. And, said Cronk, whether to open the Civil Rights Act is something that LGBT advocates have already debated “for decades” and decided against—until now.

According to Julie Gonen, policy director at the National Center for Lesbian Rights (NCLR), however, there are clear reasons for amending the existing law rather than trying to get a separate slate of laws passed.

Besides, said Gonen, in many ways tying basic civil rights for LGBT citizens to a law that’s been in place for 50 years helps illustrate what’s missing.

“The purpose of legislation like this is often to educate people on what doesn’t exist,” said Gonen. “The marriage ruling may have even reinforced that. People think that if we can have marriage equality, surely we can keep our jobs and our homes.”

The bread and butter issues

The Equality Act would amend every existing area of civil-rights law covered by the 1964 act, simply by adding the words “sex, sexual orientation, and gender identity” to the current protected classes of race, color, religion, and national origin. But the Civil Rights Act was written to reflect discrimination faced by black Americans during national desegregation efforts in the mid-20th Century—making it, some feel, out of step with current struggles prevalent in the LGBT community.

Cronk referenced the immigration struggles of LGBT asylum seekers who are often detained and deported back to life-threatening environments, as well as HIV criminalization laws under which virus-positive people are sometimes sentenced to decades in prison when accused of “non-disclosure.” In addition, she was concerned about the way law enforcement polices certain segments of the LGBT community, particularly trans women of color.

In some ways, the Equality Act would address the law enforcement issue. An embargoed copy of the proposed legislation, emailed to the Daily Dot on Wednesday, states that its reach would apply to police departments and any other facility that receives federal dollars.

The federal funding segment of the bill also mandates that the non-discrimination policies be applied at schools, in public healthcare, and in child welfare. That could have transformative power in the troubled areas of transgender insurance coverage and LGBT youth in schools and foster care.

“I’m married and happy to have been able to marry my wife. But it’s important for people to have a job and be able to keep a roof over our heads.”

While the legislation had already garnered wide Democratic support on the Hill before its introduction—House Democratic Leader Nancy Pelosi being just one of many co-sponsors attending Thursday’s press conference—it remains unclear whether it will gain success as the bipartisan effort sources said it was meant to be.

Advocates and LGBT leaders expressed a sense of patience around the legislation. Gonen pointed out that it’s difficult to get any legislation to move in the current political climate: “The Equality Act may not pass tomorrow or even in the current Congress, but you have to start somewhere.”

Adding to the challenge, other organizations are so embroiled in fighting individual discrimination cases in the courts, or lobbying against new discriminatory state laws, that they can barely slow down enough to take part in rallying around the Equality Act.

Stacey Long Simmons, director of public policy at the National LGBTQ Task Force, told the Daily Dot that the Equality Act is a “great start,” but there’s a lot of work to do in the meantime.

“A number of states have introduced so-called religious-freedom bills,” said Simmons. “We’re going to continue to play hardball on those issues and fight for LGBT people and others who don’t want their politicians using religion as an excuse to discriminate.”

The Task Force is focused on other legislation, too, that helps fill the gaps in the Equality Act—such as the End Racial Profiling Act of 2015, and continuing-education and awareness campaigns to end violence against transgender women of color.

But the basic civil rights that would be gained through amending the country’s preeminent civil-rights law are what Simmons called “the bread and butter issues.”

“For us, it has always been about much, much more than marriage,” said Simmons. “I’m married and happy to have been able to marry my wife. But it’s important for people to have a job and be able to keep a roof over our heads.”