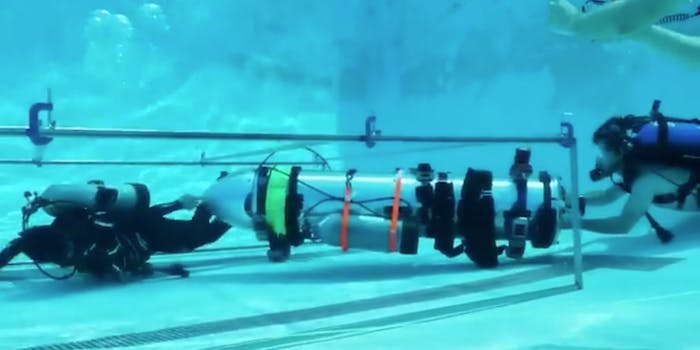 Yeah, Thailand decided not to use Elon Musk’s small submarine after all

Musk insists it could be useful in the future.

Elon Musk had been trying to help the soccer team trapped in (and now successfully rescued from!) a water-filled cave in Thailand. But his efforts didn’t end up quite as useful as he originally hoped. After volunteering a small submarine built from leftover rocket parts, Thai authorities deemed it “impractical” in their rescue operations.

The small submarine is “child-size”—just about a foot in diameter—but wouldn’t work in the rescue, according to Narongsak Osottanakorn, who was heading up the operation.

“The equipment he gave us is not practical for our mission,” Narongsak said early Tuesday. “His equipment is technologically complex and advanced, but we cannot bring it into the cave for this mission.”

Musk was insistent that the vessel could be useful in future incidents, and tweeted that he would be leaving the small submarine in Cave 3.

Just returned from Cave 3. Mini-sub is ready if needed. It is made of rocket parts & named Wild Boar after kids’ soccer team. Leaving here in case it may be useful in the future. Thailand is so beautiful. pic.twitter.com/EHNh8ydaTT

After going missing two weeks ago on June 23, a soccer coach and his team of 12 boys were discovered trapped in a cave. A rescue operation has been underway for several days. As of this morning, all the boys and the coach have been rescued from their predicament.

Musk and a team of engineers headed to Thailand July 7 to aid in rescue and recovery efforts. Musk tweeted about a variety of ideas to aid the rescue operation, and before heading to Thailand, had a team testing out his small prototype submarine in a Los Angeles area pool.

During his trip to the country, Musk also had a brief meeting with Thailand’s prime minister before going to the cave site in which he was encouraged to invest in Thailand’s Eastern Economic Corridor and visit again in the future.