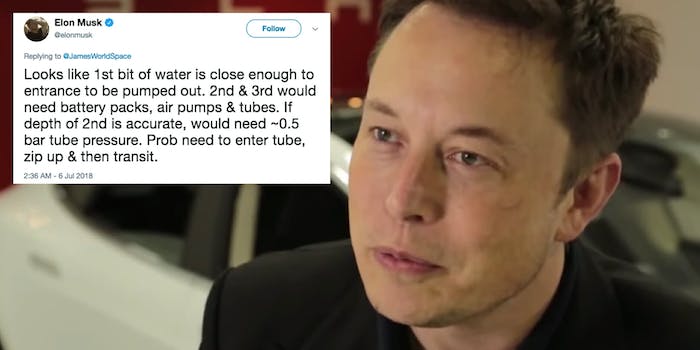 SpaceX and Boring Company engineers will assist in rescue efforts.

Elon Musk on Friday said he is deploying engineers to help the Thailand soccer team that was found trapped in a water-filled cave, BuzzFeed News reports.

Employees from Musk’s SpaceX and Boring Company will travel to Northern Thailand to assist in the rescue mission for the 12 teenagers and their coach, who were discovered alive Monday. They had gone missing on June 23.

SpaceX & Boring Co engineers headed to Thailand tomorrow to see if we can be helpful to govt. There are probably many complexities that are hard to appreciate without being there in person.

“Some SpaceX and Boring Company engineers are on the way now and more are leaving for Thailand in the next 24 hours,” a Boring Co. spokesperson told BuzzFeed. “We are in active conversations with the Thai government and people on the ground to determine how we can best assist their efforts.”

Another SpaceX engineer was already in Thailand and will also help, Musk tweeted. He said Boring Co.’s pumps and Tesla battery packs could be useful for removing water from the 6-mile cave.

Boring Co has advanced ground penetrating radar & is pretty good at digging holes. Don’t know if pump rate is limited by electric power or pumps are too smal. If so, could dropship fully charged Powerpacks and pumps.

Looks like 1st bit of water is close enough to entrance to be pumped out. 2nd & 3rd would need battery packs, air pumps & tubes. If depth of 2nd is accurate, would need ~0.5 bar tube pressure. Prob need to enter tube, zip up & then transit.

So far, the mission to save the team has proved complex and extremely dangerous. A former member of Thailand’s Navy SEAL team died trying to place oxygen tanks along a potential escape path, BuzzFeed News reports. Officials are also concerned that rain in coming days could flood the spot where the team is located.

Update 12:00pm CT, July 9: Musk continued tweeting updates about the rescue mission throughout the weekend, including video clips of a prototype “kid-size submarine” being shuttled around a pool near Los Angeles.

The pod, which is barely over a foot in diameter, was on schedule to arrive in Thailand Monday. Later in his Twitter thread, Musk congratulated himself on the achievement and used the opportunity to share a Medium post that advertised cryptocurrency giveaways.

Meanwhile, eight of the 12 soccer players have been retrieved from the cave so far, leaving four boys and their 25-year-old coach still inside.