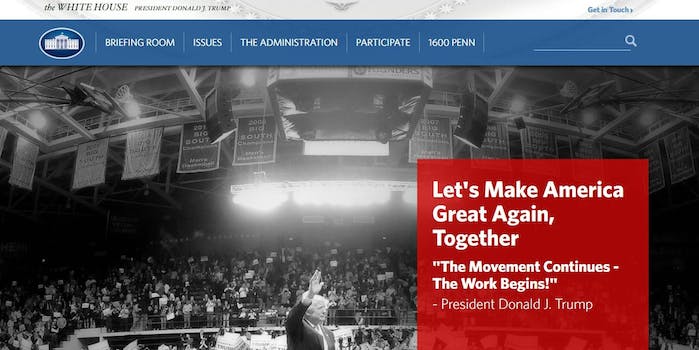 Now that Donald Trump is officially the 45th president of the United States, the official White House website has undergone some major changes.

The first orders of business were to eliminate former President Barack Obama’s Climate Action plan, while the official LGBT and climate change pages also were deleted.

While the climate change page is gone—in fact, all references to “climate change” have been erased from the website—the White House has released what is termed “An America First Energy Plan” in its place, echoing parts of Trump’s inauguration speech in which he said America would be the first priority of his administration.

Here’s what the White House climate change page under Obama looked like, via Mother Jones.

The Trump Administration is committed to energy policies that lower costs for hardworking Americans and maximize the use of American resources, freeing us from dependence on foreign oil.

For too long, we’ve been held back by burdensome regulations on our energy industry. President Trump is committed to eliminating harmful and unnecessary policies such as the Climate Action Plan and the Waters of the U.S. rule. Lifting these restrictions will greatly help American workers, increasing wages by more than $30 billion over the next 7 years.

The new policy also said Trump will bring “jobs and prosperity to millions of Americans” by taking advantage of untapped shale, oil, and natural gas reserves, including those that are on federal lands. Using the revenues from that energy production, Trump plans to improve infrastructure by rebuilding roads, schools, and bridges. The Trump administration also said it’s committed to clean coal technology while reviving the country’s coal industry.

But the website also reads, “Our need for energy must go hand-in-hand with responsible stewardship of the environment. Protecting clean air and clean water, conserving our natural habitats, and preserving our natural reserves and resources will remain a high priority. President Trump will refocus the EPA on its essential mission of protecting our air and water.”

LGBT rights are nowhere to be found on the new website.

Yeah, we don't have to worry about LGBT rights under Trump: pic.twitter.com/o7XkIwwNpK

Trump also has written down his thoughts on potential police reform on a page titled, “Standing Up For Our Law Enforcement Community.”

Less than an hour into his administration, Trump already has begun to show he has a much different vision of America than his predecessor, whose pages have now been archived on a separate government site.