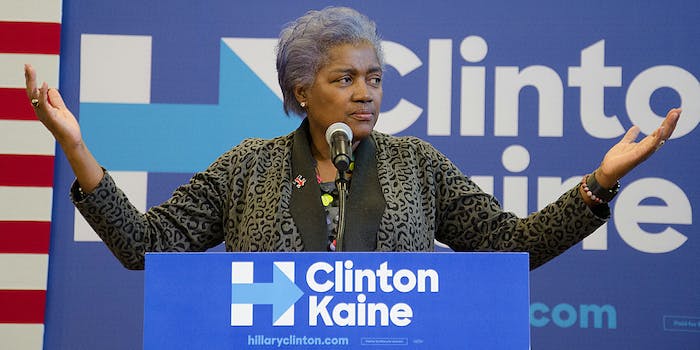 Last week, former interim Democratic National Committee Chair Donna Brazile released an excerpt from her forthcoming book in Politico. She alleges that Hillary Clinton’s presidential campaign and the DNC were inextricably linked and financially dependent on one another during the primary race against Sen. Bernie Sanders (I-Vt.). While there has been some pushback against some of Brazile’s claims, and some pushback to that pushback, one thing is clear: The DNC needs a significant overhaul.

There are five big takeaways from Brazile’s piece:

There is no use in relitigating the 2016 primary. However, there is value in looking at how the DNC operates. The thinking was, clearly, that Clinton’s rising tide would lift all boats. Instead, Hillary lost, and Democrats were also badly beaten down ballot. No matter who you supported in the primary, if you are on the Left, you should want some fundamental changes in hopes of a better result in 2018 and 2020.

As voters, what demands can we make of the Democratic Party?

Brazile claims that due to mismanagement following former President Barack Obama’s re-election, the Clinton campaign took millions in DNC debt and issued a $2 million loan to the DNC. She writes, “As Hillary’s campaign gained momentum, she resolved the party’s debt and put it on a starvation diet. It had become dependent on her campaign for survival, for which she expected to wield control of its operations.”

This led to an arrangement wherein the Hillary Victory Fund (HVF), a combined fundraising effort of the Clinton campaign and the DNC, could collect donations of hundreds of thousands of dollars in individual donations with the promise that much of the money would go to the DNC. Allegedly, much of this money actually went back to the Clinton campaign.

While it might be tempting to blame Clinton for taking advantage of this situation, it’s probably more useful to blame the DNC for creating it in the first place. Former DNC chair Debbie Wasserman Schultz is said to have kept an unusually large number of consultants on the DNC payroll between election years, and the plan to pay off debt from Obama’s 2012 campaign was poor, resulting in big-time debt.

Journalist and DNC Reform Commission member Nomiki Konst tells the Daily Dot that many financial decisions at the DNC have been made unilaterally by the chair, resulting in mismanagement and a lack of transparency. She calls for “participatory budgeting” at the DNC wherein the executive committee oversees and approves expenditures.

“All roads lead to the fact there was very little financial transparency,” Konst says. “Decisions were being made by the chair and the chair alone. The executive committee needs to see the budget and approve expenses.”

Voters must demand a transparent spending process at the DNC.

The result of all of that money going to the Clinton campaign was that state and local elections were shortchanged. Brazile claims, “Money in battleground states usually stayed in that state, but all the other states funneled money that money directly to the DNC, which quickly transferred it to Brooklyn [Hillary’s campaign headquarters].” A Politico piece from the summer of 2016 corroborates Brazile’s claim. The article alleges that state Democratic parties only kept 1 percent of $60 million that was supposed to be split between state parties and the HVF.

You have to wonder what the DNC and the Clinton camp considered battleground states, as last year’s electoral map ended up looking quite different than usual. Would allocating more funds in local races in these states helped shift the narrative of the Democrats as absent and unconcerned with the average American? Democrats are still feeling the effects of this arrangement. Konst says, “State parties don’t have any money to recruit candidates.”

Though the general election is over, the DNC continues to allocate money in strange ways. While massive resources were poured into the failed campaign of congressional hopeful John Ossoff in Georgia, progressive candidates like Rob Quist in Montana have felt largely ignored.

Voters must demand robust support for down-ballot candidates across the country and across the Democratic Party.

Brazile alleges that a joint fund-raising agreement was signed between the DNC, the Hillary Victory Fund, and Hillary for America in August of 2015, “just four months after Hillary announced her candidacy and nearly a year before she officially had the nomination.” Even if you’re willing to overlook that ethical challenge, it is clear that the level of control Clinton’s agreement gave her team over the party went above and beyond what is acceptable.

Adam Green, the co-founder of the Progressive Change Campaign Committee, called for the end of joint fundraising agreements last week, claiming they “give an advantage to one candidate over another during a primary.”

Massachusetts Sen. Elizabeth Warren told CNN that the DNC and its chairman, Tom Perez, must bring “Bernie Sanders and Bernie Sanders’ supporters into the process, and they’re going to say it’s fair, it works, we all believe in it, or he’s going to fail.”

The DNC has not inspired confidence that they will follow Warren’s suggestions. Despite a hotly contested race for DNC chair, Perez opened his tenure by getting rid of supporters of his defeated progressive opponent, Minnesota Rep. Keith Ellison. A number of progressives called the move a “purge.”

Voters must demand open primaries in all elections and representative that look like the totality of the party’s constituency.

It is clear that the battle for the DNC is only just beginning. As the work of the Reform Committee continues and the future of the party continues to be debated, it is going to be important for voters to demand changes in the Democratic Party. While the events of the past are unfortunate, failing to learn from them could result in a more terrible future, greater Republican control of local government, and eight years of Donald Trump.