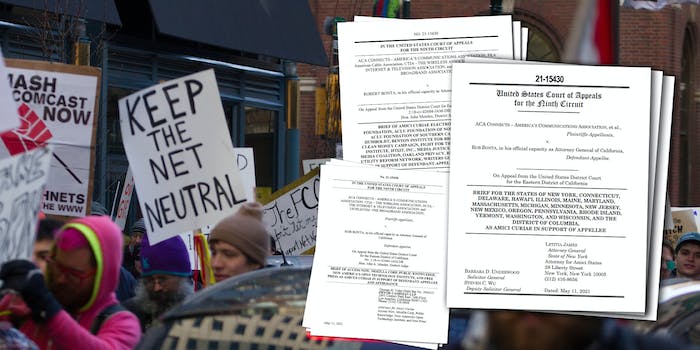 A whole host of groups are stepping up to show their support for California's law.

Earlier this year, California’s “gold standard” law secured a victory when a U.S. District Court judge denied a request by the ISP groups seeking to halt California from enforcing it. The net neutrality law in California has been celebrated by advocates because it is actually broader in scope than the rules enacted by the Federal Communications Commission (FCC) in 2015 that were eventually repealed.

However, the judge’s decision to deny a request for a preliminary injunction was appealed by the ISP groups, forcing the legal battle to the United States Court of Appeals for the 9th Circuit.

Earlier this week, Mozilla, Access Now, Public Knowledge, New America’s Open Technology Institute, and Free Press filed an amicus curiae with the court defending California’s law. In it, they argue that the 9th Circuit should affirm the lower court’s decision to deny the preliminary injunction.

Within the filing, the groups push back against claims that investment dropped because of net neutrality rules and noted that “ISPs have a history of undermining net neutrality.”

They also wrote that ISPs undermine net neutrality with “harmful zero-rating practices.” California’s law prohibits zero-rating, or when an ISP does not count specific content against a customer’s data cap. The FCC’s 2015 net neutrality rules did not specifically prohibit the practice.

In another amici curiae, other advocacy groups like the Electronic Frontier Foundation, Fight for the Future, MediaJustice, the National Hispanic Media Coalition, and the technology company Reddit also defended the law.

Their brief focused on how the California law “provides essential protections for vulnerable and marginalized Californians,” and how net neutrality protections were necessary during the coronavirus pandemic.

In yet another amici curiae, 19 attorneys general from across the country also showed their support for California’s law. The states included New York, Illinois, Massachusetts, New Jersey, Oregon, Vermont, and several others.

The attorneys general told the court that federal law does “not categorically preempt state regulation of broadband providers,” which is a major contention of the ISP lobby groups.