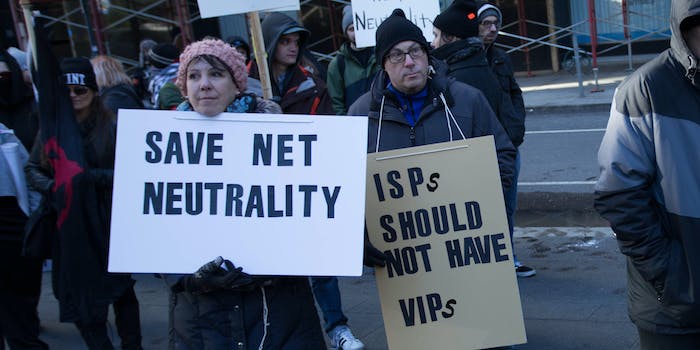 AT&T said it was halting its 'sponsored data' programs in the wake of a recent court decision.

AT&T is halting some of its services in the wake of a California judge’s recent decision that allowed the state to begin enforcing its “gold standard” net neutrality law.

The company said in an announcement on Wednesday that it would be halting its “sponsored data” programs, just a few weeks after Judge John Mendez ruled against trade groups representing internet service providers who sought to stop California from implementing its law.

California’s net neutrality law has been hailed by supporters because it is more comprehensive than the Federal Communications Commission (FCC) rules that established net neutrality in 2015. Tech advocates have said California’s law is the “gold standard” for other states to follow if they want to enact net neutrality laws in the absence of ones at the federal level.

Specifically, California’s law prohibits “zero rating,” or when an ISP doesn’t count specific content, or apps, against a consumer’s monthly data cap. As the Electronic Frontier Foundation (EFF) notes, these zero-rating plans come from content providers who pay ISPs to have their own content not count against data caps.

In the announcement Wednesday, AT&T attempted to shape the decision as a loss for consumers, adding that it regretted the “inconvenience to customers.” AT&T’s plan allowed for companies to pay for, or “sponsor” the data usage from customers so that it would not count against the customer’s cap.

Last year, AT&T said HBO Max would not count toward customers data caps because it was part of the “sponsored data” program. That decision raised eyebrows because since AT&T owns HBO Max, it was essentially paying itself. That prompted questions from several lawmakers who wrote to AT&T CEO Randall Stephenson and said the “practice of allowing one arm of your company to ‘pay’ another arm of your company for preferential treatment attempts to mask its true impact.”

It also unfairly harms customers who might be forced to pick between streaming services, with the practice helping AT&T tilt them away from competitors

“Given that the Internet does not recognize state borders, the new law not only ends our ability to offer California customers such free data services but also similarly impacts our customers in states beyond California,” the company wrote in a blog post.

The company went on to criticize a “patchwork” of state-level laws and urged Congress to pass a federal net neutrality law.

There seems to be some movement on that front—although it seems highly unlikely that AT&T would support some of the more prominent options coming through the pipeline. Earlier this month, Sen. Ed Markey (D-Mass.) said he would be reintroducing net neutrality legislation in the “coming weeks.” Markey sponsored the Senate version of the Save the Internet Act, which would have essentially codified the FCC’s 2015 rules.

Meanwhile, it has been widely assumed the FCC would restore net neutrality rules now that President Joe Biden has the ability to nominate a final commissioner to the agency and give Democrats a 3-2 majority.

AT&T’s statement was blasted by net neutrality supporters on Wednesday.

“LOL here’s AT&T complaining about not being able to offer zero rating scams due to the California #netneutrality law. Maybe someone should ask them why they have arbitrary data caps to begin with?” Evan Greer, the deputy director of Fight for the Future, tweeted.

“AT&T cancelling its discriminatory zero rating due to California’s net neutrality law is a good thing for consumers,” EFF’s Senior Legislative Counsel Ernesto Falcon wrote in a series of tweets, adding: “AT&T’s version of zero rating with low data caps was a way to drive their users to content they owned. It is why low income advocates in CA wanted it gone. Mobile only users tended to be low income and weren’t getting the full Internet.”

The lobby groups representing ISPs are appealing Mendez’s ruling where he denied the preliminary injunction request.