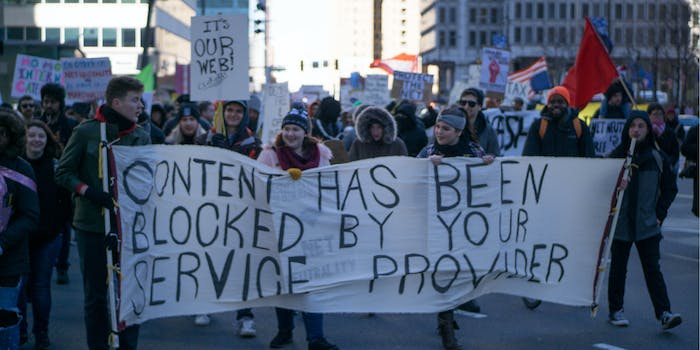 Lawyers for both California and the trade groups went back-and-forth before Judge John A. Mendez on Tuesday, arguing both for and against the state’s law, which has been hailed as the “gold standard” for states to follow because it goes further than the Federal Communications Commission’s (FCC) 2015 Open Internet Order, which established net neutrality rules.

While the Department of Justice (DOJ) withdrew from its lawsuit challenging California’s law earlier in February, the trade groups continued its lawsuit. The DOJ filed a lawsuit against California over the law in 2018 during the Trump administration.

For a motion for preliminary injunction to be granted, the plaintiffs—the trade groups representing ISPs—needed to convince the judge that it would succeed based on the merits of its arguments and California’s law would cause them irreparable harm. They also asserted that the FCC’s 2018 order that repealed net neutrality rules preempted California from enforcing their own.

California, in a recent court filing, said that the DOJ’s decision to withdraw from its lawsuit “underscores” its argument that its net neutrality law, SB822, was not preempted.

On Thursday, Mendez ruled that the telecom industry was unlikely to prevail on the merits of its preemption arguments, and, because of that, he didn’t need to make a “detailed finding” on the question of irreparable harm.

“I don’t find that the plaintiffs have demonstrated a likelihood of success on the merits at this stage of the litigation,” Mendez said, noting that the Communications Act doesn’t preempt states from enacting their own laws.

That means California can begin enforcing its net neutrality law, as Barbara van Schewick, the director of the Stanford Center for Internet and Society noted shortly after the judge ruled. It is also possible that the ruling will face an appeal.

While he said he would not present into the question of irreparable harm during his ruling, Mendez seemed to disagree with the arguments laid out by lawyers representing ISPs. When the trade group’s lawyers used an example of AT&T having to restructure its business in the state if it couldn’t offer zero-rating plans as an example of harm, Mendez replied by saying that it sounded like “economic” harm, not irreparable harm.

The decision by Mendez was cheered by California State Sen. Scott Wiener, who authored SB822.

“MAJOR WIN FOR NET NEUTRALITY! The federal court just rejected the effort by telecom & cable companies to block enforcement of the net neutrality law I authored, #SB822! The court ruled that California has the authority to protect net neutrality. SB 822 can now be enforced!” Wiener tweeted.

“When the FCC, over my objection, rolled back its #netneutrality policies, states like California sought to fill the void with their own laws. Tonight a court in California decided that the state law can go into effect. This is big news for #openinternet policy,” Rosenworcel wrote on Twitter.