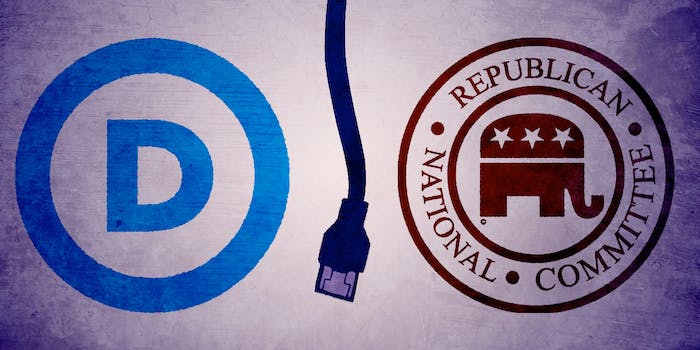 'A free and open internet is an engine of economic growth,' the groups told the two major parties.

Civil-society groups asked the Democratic and Republican parties to consider their perspectives on internet policy as the national party committees plan their 2016 platforms.

Noting that both party committees were hosting technology lobbyists in Washington this week for conversations about the party platforms, a coalition including the Center for Democracy and Technology, Demand Progress, the Electronic Frontier Foundation, and the Media Access Project urged both parties to “ensure that conversations about internet and technology policy include the voices of public interest advocates and affected communities.”

The groups highlighted the persistent broadband gap that makes it difficult for low-income communities to take advantage of everything that the internet has to offer. This so-called “digital divide” makes it harder for low-income people to find jobs and for children of low-income parents—who often lack a steady internet connection—to do increasingly internet-dependent homework.

“As the process of developing your platforms continues,” the groups wrote to RNC Chairman Reince Priebus, DNC Chairwoman Debbie Wasserman-Schultz, and the parties’ platform committee leaders, “we believe it is vital that platform committees both understand the perspectives of the communities we advocate for and recognize how a free,open, and accessible internet supports so many of your policy goals.”

The letter cited three key areas of interest: expanding access to the internet, preserving its openness through policies like net neutrality—the principle that internet providers treat all content equally—and protecting the privacy of people’s online information.

Democrats are traditionally more sympathetic to these concerns than are Republicans, which will make the party conventions in July an interesting showcase of the philosophical divide over technology policy.

Liberals are more supportive of net neutrality than conservatives, and Republican lawmakers—who receive more industry donations than their Democratic colleagues—have responded to their constituents’ concerns about a supposed government takeover of the internet by trying to block the Federal Communications Commission’s 2015 open-Internet rules.

Privacy regulation also draws more Democratic than Republican support. Although the FCC’s plan to impose new privacy rules on broadband internet providers has been met with bipartisan criticism, the bulk of it is coming from Republicans.

Only a third of Republicans see internet access as a right, compared to 56 percent of Democrats, according to a July 2015 Morning Consult survey. In June 2015, Republican FCC commissioner Michael O’Reilly said, “It is important to note that internet access is not a necessity in the day-to-day lives of Americans and doesn’t even come close to the threshold to be considered a basic human right.”

In their letter, the civil-society groups stressed the need to expand access to and protections on the internet so that the online innovation of the last three decades would continue.

“A free and open internet is an engine of economic growth, healthcare modernization, and social movements and change,” the groups argued, “and it is crucial that we protect the personal information and rights of all Americans to communicate.”

Neither party committee responded to requests for comment on the letter.