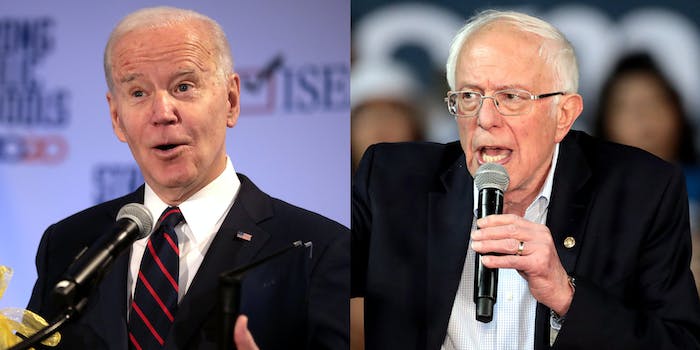 Biden, Sanders call for net neutrality principles to be restored

The proposals come from unity task forces created in May, which Biden and Sanders both appointed people to.

The proposal on responding to coronavirus mentioned net neutrality—an issue that Sanders and a host of other presidential hopefuls were outspoken about on the 2020 campaign trail.

Biden had remained more-or-less silent on the issue until March, which raised some eyebrows from advocates.

The proposal—which is essentially a list recommendations for the DNC to adopt as the party’s platform and for Biden to adhere to—makes it clear that there is support to undo the Federal Communications Commission’s (FCC) repeal of net neutrality and restore its authority to regulate internet service providers.

“Democrats will restore the FCC’s clear authority to take strong enforcement action against broadband providers who violate net neutrality principles through blocking, throttling, paid prioritization, or other measures that create artificial scarcity and raise consumer prices for this vital service,” the document reads.

In March, a Biden campaign spokesperson told the Daily Dot the former vice president supported net neutrality and was “outraged” when the FCC repealed it.

However, the campaign declined to comment on more specifics, including whether he supported classifying providers under Title II of the Communications Act.

The policy recommendation seems to hint at that support.

If Biden were elected it is possible that the Save the Internet Act, a bill that would essentially restore net neutrality by making it law, could be signed if it passed through Congress.

Keeping net neutrality was part of the Democratic Party’s official position in the 2016 election.