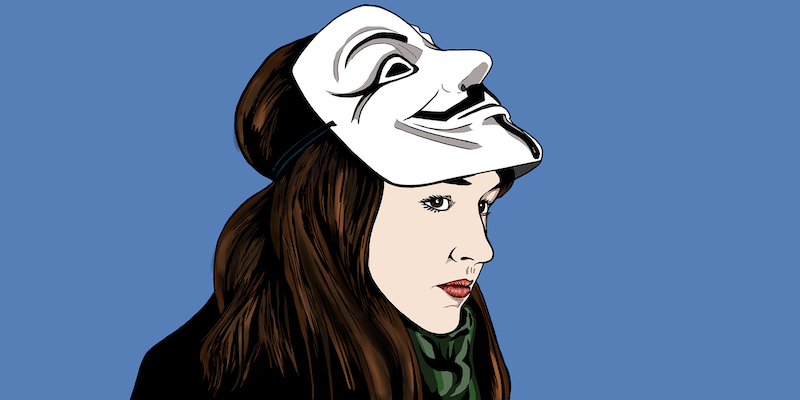 ‘Anonymous’ hackers have a message for Texas abortion ‘snitch’ sites: We’re coming for you

Operation Jane is mobilizing the hactivist and pro-choice community.

Texas’ anti-abortion law allows anyone to sue a person who obtains or facilitates an abortion after the sixth week of pregnancy for $10,000 plus attorney’s fees. The monetary award has come to be known as an “abortion bounty” and those who may sue under the law as “bounty hunters.” The law has no exceptions for pregnancies involving rape or incest.

The United States Supreme Court declining to block the law sent shockwaves through the pro-choice movement.

On Sept. 3, Operation Jane tweeted a video press release condemning the law and promising to fight it.

“Greetings citizens of the world. This is a message from Anonymous’ Operation Jane. Texas Senate Bill 8 is one of the most restrictive and extreme pieces of anti-choice legislation in the United States,” the release begins.

Operation Jane says the law “creates an army of private enforcers.” They say that anyone should be alarmed, irrespective of their feelings about abortion, because the law circumvents federal constitutional rights.

“It provides the basic framework to target and dismantle any federal constitutional right without consequence or accountability,” they say in the release.

After noting that other states are now considering similar legislation, Operation Jane issues a promise and a call to action.

“We must act,” they say. “Every strategic model employed to collect information for SB8 bounties will be compromised and rendered inoperable.”

“Troves of data will be manipulated to result in an inherently spoiled cache of information. We will exhaust the investigational resources of bounty hunters, their snitch sites, and online gathering spaces until no one is able to maintain data integrity.”

Operation Jane told the Daily Dot via direct message on Twitter that they view this as a “rare opportunity” for people outraged by the law to participate in a “massive form of online grassroots pressure to help protect access to reproductive healthcare.”

They added that anti-choice extremists rely on online intelligence gathering and crowdsourcing for their efforts, which renders them vulnerable.

“These models are prone to wide scale, prolonged adversarial attacks that can render any data they gather as useless, provided we insert enough plausible and difficult to disprove misinformation,” Operation Jane said. “If we put enough poison in the well, then the well is poisoned and no one will drink it.”

They reiterated their belief that other states will enact such laws. They also said laws targeting reproductive rights are only the beginning of the attacks on other federal rights via vigilante bounty systems.

“In short, we hope to create a legal clusterfuck that slows down or prevents these lawsuits from coming into fruition,” Operation Jane said.

These efforts have been widely applauded by advocates for reproductive freedom.

Operation Jane also launched accounts on Twitter, TikTok, and Instagram. And it aggregated links to resources for people seeking abortions and sites where others can “snitch” on them, the latter presumably for those who might be inspired to hack them.

Since launching, Operation Jane has been waging a multifaceted campaign that includes memes, resources, and analysis.

The operation, which may have been named for a pre-Roe v. Wade covert abortion network, is rapidly gathering support for these efforts. Many supporters are using the hashtags #OperationJane, #OpJane and #ExpectUsTexas to amplify its message.

“There are innumerable theories about Anonymous,” Operation Jane’s release concludes. “We are everything, anyone, nothing, and no one all at once. Join us.”