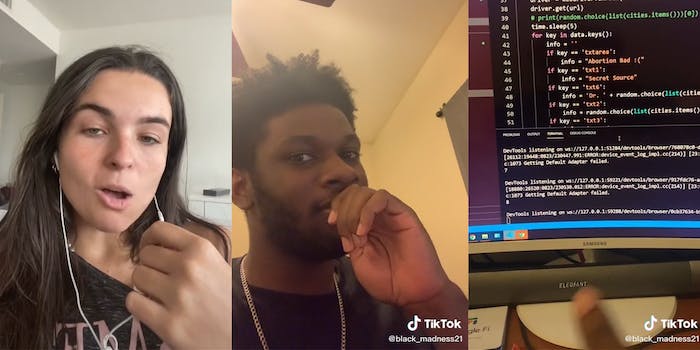 ‘The kids will save us’: TikToker creates bot to spam abortion snitch website with fake reports (updated)

The internet is rising up to fight back against Texas' anti-abortion law.

A TikToker created a bot to spam the Texas website for reporting women who get abortions. Texas recently passed a law that bans abortions after six weeks, when many women don’t even realize they’re pregnant yet. The law gives private citizens the right to sue the woman who gets an abortion, as well as anyone who performed or facilitated it, such as by driving her to a clinic.

Earlier in the week, the United States Supreme Court defied expectations by declining to block the law from going into effect. The law clearly runs afoul of Roe v. Wade, the landmark 1973 case that legalized abortion nationwide.

Many online have been in an uproar since the law went into effect. One TikToker came up with a creative way to stymy those who wish to report women for obtaining an abortion.

Sean Black, who goes by @black_madness21 on TikTok, created a tool that sends false reports to Texas Right to Life, the website where people can tattle on women who terminate their pregnancy.

“All right, hear me out, what if somebody very technical, very handsome, set up a bot that automatically sends a request to their website,” Black says in the TikTok. “Oh wait, it was me. I did that.”

Black then laments that it’s “not as efficient as it could be.”

In a followup TikTok, Black says he also made an iOS shortcut that’s easier to use for those who aren’t as tech savvy. He says the tool randomly selects a Texas city, county, and ZIP code and automatically generates a report. Then it refreshes the page and gives people the option to do it again, he says.

“Because it uses realistic information, it makes it much harder for them to parse through the data,” Black says.

Motherboard confirmed that the shortcut is effective.

Internet users who believe in reproductive freedom are thrilled with Black’s work.

“The kids will save us,” commented one Twitter user.

Texas Right to Life told USA Today that it’s been bombarded with false reports, but said it expected as much.

“Yes, pro-abortion advocates have been trying to crash the site for over a week and have failed,” Kimberlyn Schwartz, Right to Life’s director of media and communications, told the outlet. “You might see some people online saying it crashed, but that’s not true. They can’t access it because their IPs are getting blocked.”

The site now requires a captcha to submit a report. Motherboard reports that Black’s tool still works after completing the captcha. He is reportedly working on a solution to the captcha issue.

Update 11:01am CT Sept. 3: When reached for comment, Black told the Daily Dot via TikTok direct message that he’s been working with “programmers around the country” on updating the tool. “We have found a way around the captcha and are beta testing it now,” he said.

When asked what inspires him to fight for reproductive freedom, Black said, “I just feel as though if there’s something we can do to combat right violations like this, no matter how small we think it is, we should do it.”