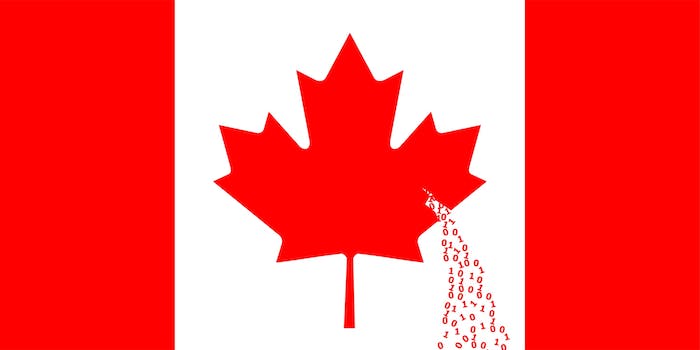 The attack was confirmed on Wednesday afternoon by Treasury Board President Tony Clement on Twitter. The websites of Industry, Justice, Foreign Affairs, and several other departments were affected. “Many government email accounts” were on the brink as well, according Clement, who told the Globe and Mail that the attacks were ongoing.

An Anonymous video claiming responsibility was uploaded on Wednesday too, admonishing the Canadian government over Bill C-51; the recently passed legislation was a significant overhaul of the government’s authority concerning surveillance, immigration, and information sharing.

Also known as the Anti-terrorism Act 2015, C-51 enacts the Security of Canada Information Sharing Act, which authorizes the government to disclose information more freely between agencies in the interest of security; and the Secure Air Travel Act, which, among its provisions, includes language intended to lower the threshold for placing individuals on no-fly-lists.

“Today… We launched an attack against the Canadian Senate and government of Canada websites in protest against the recent passing of bill C-51,” Anonymous’s video said. A digitized voice also called the bill a “a clear violation of the Universal Declaration of Human Rights.” The individual or group behind the message also requested that Canadian citizens protest in the streets on Saturday.

On Twitter, the video and action was promoted, and by a minority criticized, under the hashtag #OpCyberPrivacy.

At press time, the Canadian government had not released any additional information about the attack citing an ongoing investigation.