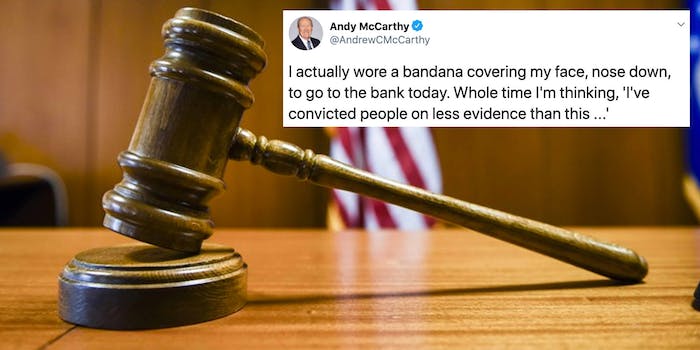 'You just made a terrifying point about our criminal justice system which you didn't intend to make.'

A former top lawyer’s tweet about wearing a face mask amid the coronavirus pandemic has sparked a major backlash online.

Andrew McCarthy, who served as an Assistant U.S. Attorney for the Southern District of New York, recently noted that he’d “convicted people on less evidence than this” after having to cover his face in a bank.

“I actually wore a bandana covering my face, nose down, to go to the bank today,” he tweeted. “Whole time I’m thinking, ‘I’ve convicted people on less evidence than this…'”

McCarthy, currently a columnist for the National Review and a Fox News contributor, was immediately met with criticism for his remark.

“You just made a terrifying point about our criminal justice system which you didn’t intend to make,” one Twitter user wrote.

The statement was seen by many as an admission that some attorneys are more concerned with winning a case than actual justice.

Others questioned whether McCarthy’s comment was actually a realization on issues within the criminal justice system.

“Yea sometimes I do a mundane task and passively realize I’ve caused needless unimaginable suffering to scores of people my entire life as well,” @the_antifada added.

McCarthy’s tweet has thus far garnered over 4,600 responses and more than 13,200 retweets.

Despite the significant response to his tweet, McCarthy has not discussed the matter further.

In other words, the jury is still out on whether the former high-profile attorney has connected the dots.