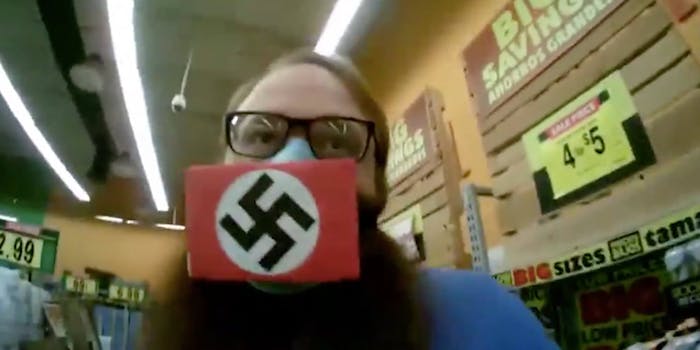 They claim the masks are to protest their 'Nazi' governor.

We’ve seen plenty of people getting creative with their face masks in the time of COVID-19, either due to not having conventional materials or just wanting to add a little bit of flair to this dystopian-esque item we all need to be wearing on our faces in public for the time being.

But one couple in California took mask customization to a shockingly vile place, opting to cover their mouths with swastikas while they were out shopping last week.

Dustin Hart and a woman identified as his wife were clearly looking to create a scene at a Food 4 Less in Santee. The two had attached Nazi flags to the front of their masks with velcro, and Hart began filming via body cam before any confrontation appeared to take place.

Eventually, a store employee approached the couple and told them that displaying a swastika is “basically a hate crime,” something Hart refuted by essentially claiming they were actually taking part in a peaceful protest against the people he considers to be real Nazis.

“It’s not a hate crime. They can wear their antifa communist thing. And if they’re going to act like a bunch of Nazis and have Governor Newsom enforce all these Nazi laws, then it is what it is,” he said. “It’s a peaceful protest.”

The police were eventually called to the store and asked Hart to remove his swastika, which they told him he was free to wear outside of the privately owned business.

“It’s just discrimination,” Hart complained, before again insisting he was protesting against California’s “Nazi for a governor.”

He also dragged homophobia into the conflict, saying he finds the LGBTQ flag offensive but never calls the cops. Unfortunately for Hart, the rainbow flag was never used as a symbol of dominance for a hate group that targeted and murdered millions of Jews, so his argument didn’t hold much weight.

Hart himself eventually uploaded the 14-minute video to BitChute, a site known for hosting hate-fueled content that gets removed from YouTube such as alt-right rants and conspiracy theories.

“We were peacefully protesting all the crazy lockdown rules that have been and are continuing to be enforced here in San Diego, California,” reads the description. “These crazy rules are destroying any quality of life we had left.”

This isn’t the only racist incident of its kind to be seen in Santee recently.

Last weekend, a man shopping at Vons was photographed wearing a KKK hood in lieu of a mask. That man was also repeatedly asked to remove his hood, a request that reportedly went unheeded until he was in the checkout lane.

In both cases, the shoppers openly displaying symbols of racism were not forcibly removed from the stores but were instead allowed to purchase their items and, more or less, leave quietly.