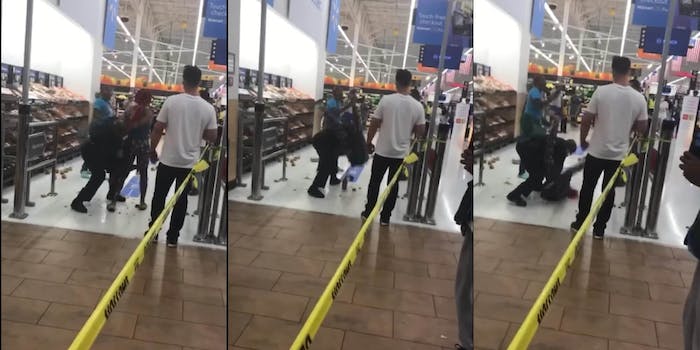 The Alabama police officer was off-duty at the time.

An off-duty Alabama police officer body-slammed a Walmart customer for “disorderly conduct” after she refused to wear a face mask and yelled obscenities in the store, according to the Birmingham Police Department.

In a viral video of the May 5 incident, the officer attempts to arrest an unidentified woman in Roebuck Walmart as she tries to push away. Surrounded by customers, the officer lifts the woman in the air and slams her on the floor face-first.

The Birmingham Police Department responded to the incident on May 7 and said that an investigation is underway.

“The preliminary investigation suggests the Walmart associate requested the female wear a face covering prior to entering the store,” Sgt. Rod Mauldin said. “After the interaction with the store associate, the customer became disorderly, resulting in the officer’s initial contact with her.”

Mauldin said the officer used a “takedown method to gain control” of the customer because of “other threat factors in the store.” He said the woman was not injured during the encounter and refused medical examination.

The woman was charged with disorderly conduct, resisting arrest, criminal trespassing to the third degree, possession of marijuana, and unlawful possession of a controlled substance.

“The individual was not charged with any violation of the face covering ordinance,” Mauldin said. “And [Birmingham Police Department] maintains an educational approach to the ordinance.”

Birmingham Police Department did not immediately respond to the Daily Dot’s request for comment.