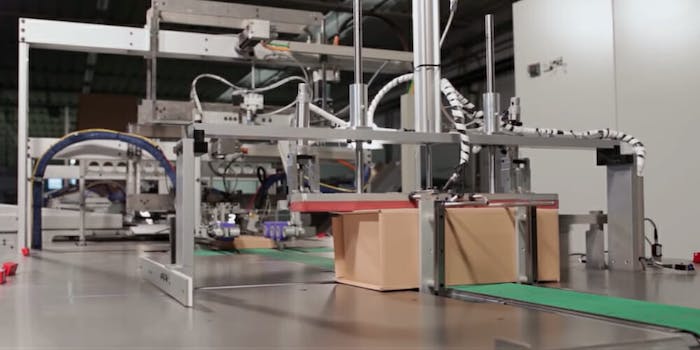 Amazon is rolling out box packaging machines that could replace workers

The automated machines could replace over 1,300 workers.

Amazon is rolling out automated packaging machines while offering some employees up to $10,000 to quit and deliver packages as contractors instead.

The online retail giant is currently debating whether to expand the use of such machines, which can scan and package items with custom-made boxes depending on their size. Amazon box packaging is a job currently held by the company’s human employees.

The machines could replace 24 workers at every warehouse they are placed. This means that the jobs of over 1,300 people could be cut across the country, as the company is considering “installing two machines at dozens more warehouses,” Reuters first reported.

The machines, which were built by Italian firm CMC Sr, can package anywhere from 600 to 700 boxes per hour. The machines package items at “four to five times the rate of a human packer,” according to Reuters.

In a statement to Reuters, Amazon said it was testing out the equipment with the end goal of benefitting the consumer.

“We are piloting this new technology with the goal of increasing safety, speeding up delivery times and adding efficiency across our network,” Amazon said. “We expect the efficiency savings will be re-invested in new services for customers, where new jobs will continue to be created.”

News of the packaging machines comes just as Amazon is expanding a company program that encourages workers to quit in order to deliver packages as contractors instead.

Part of Amazon’s effort to give its Prime members one-day shipping, the company has offered to financially assist anyone willing to start their own delivery business.

“Amazon says it will cover up to $10,000 in startup costs for employees who are accepted into the program and leave their jobs,” AP reported. “Those who participate will be able to lease blue vans with the Amazon smile logo stamped on the side. The company says it will also pay them three months’ worth of their salary.”

Those who leave their jobs in order to deliver packages as contractors will also lose their employee benefits such as health insurance.