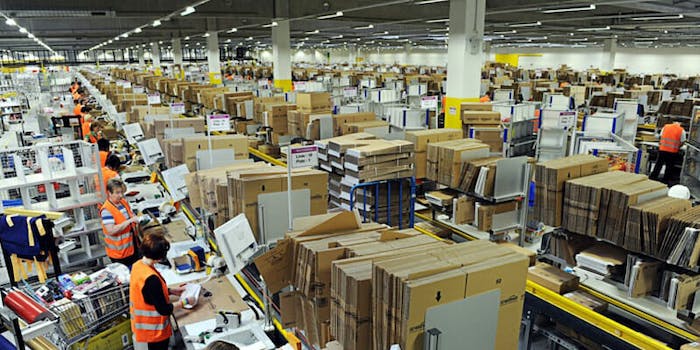 At least 189 mental health-related calls made to 911 over a five-year period.

Dozens of 911 calls emanating from Amazon warehouses reveal just how mentally taxing the job can be for many of the company’s employees, a new report from the Daily Beast shows.

The investigative piece, based on “911 call logs, ambulance and police reports” obtained through open-record requests, indicates that more than 189 mental health-related calls were made to the police between October 2013 and October 2018.

Those calls, made from 46 warehouses in 17 states, specifically surrounded “suicide attempts, suicidal thoughts, and other mental-health episodes.” Other areas of the country with warehouses present, however, “either did not have any suicide reports or declined requests for similar logs.”

While the data is “not evidence that Amazon staffers experience suicidal episodes more often than other American workers,” the Beast notes that it does “offer a visceral, real-time glimpse of employees on the edge.”

Numerous examples outlined in the report break down how the company’s controversial work environment, which includes intense boredom, timed bathroom breaks, and digital surveillance, appears to greatly affect employees in a negative way.

One former employee, Florida resident Jace Crouch, stated that co-workers having what he described as emotional breakdowns was a “regular occurrence.”

Although some employees admittedly came into the job with mental health issues, the company’s workplace policies, they say, undoubtedly exacerbated their problems.

Facebook posts from Forrest concerning his job changed from positive to negative, with one mocking company CEO Jeff Bezos for awarding his hard work with a $1 coupon.

“I would like to thank one of the worlds [sic] richest men, multi billionaire Jeff Bezos, for the opportunity to win this overly generous $1 vending machine coupon to use in the Amazon cafeteria as a reward for my hard work today,” Forrest said in a January 2017 post. “I’m confident that the free snickers bar I consume tomorrow will help further compel me to keep being the best picker that I can be!”

Shortly after another post in which Forrest described having to work “280 hours in 5 weeks,” friends say his mood began to darken. After developing suicidal thoughts, Forrest took one month off and visited a psychologist who diagnosed him with bipolar disorder.

Suicidal comments from Forrest led Amazon workers to call 911 in late 2017. Although Forrest returned to work again after evaluation at a hospital, co-workers say his situation never fully improved. In early January 2018, Forrest left a suicide note on Facebook and ended his life.

Forrest’s father, Butch, says that although his some had many struggles, he believes his job at Amazon was a significant factor in his death.

In response to the Beast’s report, Amazon argued that the data presented was an “overgeneralization” that “doesn’t take into account the total of our associate population, hours worked, or our growing network.”

It said the well-being of employees was a top priority. The company also stated that it offered a wide array of options for employees struggling with mental health problems.

“We provide comprehensive medical care starting on day one so employees have access to the care when they need it most, 24-hour a day free and confidential counseling services, and various leave and medical accommodation options covering both mental and physical health concerns,” Amazon added.

The company has long been criticized for its work environment, where long hours and demanding quotas have reportedly led some employees to go as far as to urinate in bottles to avoid time-consuming bathroom breaks.