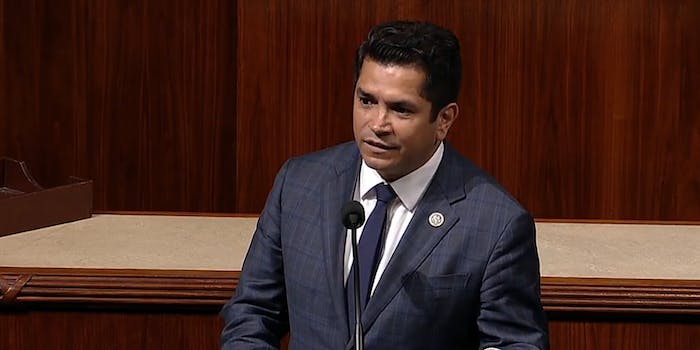 Rep. Jimmy Gomez said Amazon should put 'substantive action' behind their statements of solidarity with the Black community.

A member of the House of Representatives who was misidentified as a criminal in an experiment using Amazon’s facial recognition software told the company its recent announcement of a one-year moratorium on police use of the technology “raises more questions than answers.”

Rep. Jimmy Gomez (D-Calif.) sent a letter to Amazon CEO Jeff Bezos this week where he raised questions about the retail giant’s announcement that it would halt police use of facial recognition technology for a year.

Others have called for an outright ban on government and law enforcement use of the technology.

After Amazon’s announcement, a number of advocates said the moratorium did not go far enough and blasted it as a “public relations stunt.”

In 2018, the American Civil Liberties Union (ACLU) conducted an experiment with Rekognition where it mismatched 28 members of Congress to criminals in a mugshot database. Amazon has defended itself against the experiment and has criticized the methodology, saying they recommend a higher threshold for accuracy than what was used.

Gomez was one of the lawmakers mismatched, as CNET notes.

In his letter, Gomez says Amazon’s moratorium announcement earlier this month fails to answer a number of questions including: if Amazon will stop selling Rekognition to police during the year-long halt; if it will stop developing the technology during the moratorium; and if the moratorium extends to federal law enforcement, not just “police” as the announcement said.

“While I am encouraged by the direction Amazon appears to be taking on this issue, the ambiguity of the announcement raises more questions than answers,” Gomez wrote in the letter, later adding: “I am also troubled by the one-year expiration of the moratorium and how Amazon will proceed in the event federal legislation is not signed into law within this self-imposed
timeframe.”

Amazon did not immediately return a request for comment from the Daily Dot.

The lawmaker also asked Amazon to answer a number of questions he has asked the company—and not received answers to—in the past.

At the end of the letter, Gomez echoed advocacy groups who said Amazon could be doing more, particularly after it released a statement in support of Black Americans in the wake of protests across the country against police brutality and racism.

“Corporations have been quick to share expressions of support for the Black Lives Matter movement following the public outrage over the murders of Black Americans like George Floyd at the hands of police. Unfortunately, too many of these gestures have been performative at best. Calling on Congress to regulate facial recognition technology is one of these gestures,” Gomez wrote.

“However, Amazon—as a global leader in technology and innovation—has a unique opportunity before them to put substantive action behind their sentiments of ‘solidarity with the Black community’ by not selling a flawed product to police, and instead, play a critical role in ending systemic racism in our nation’s criminal justice system.”