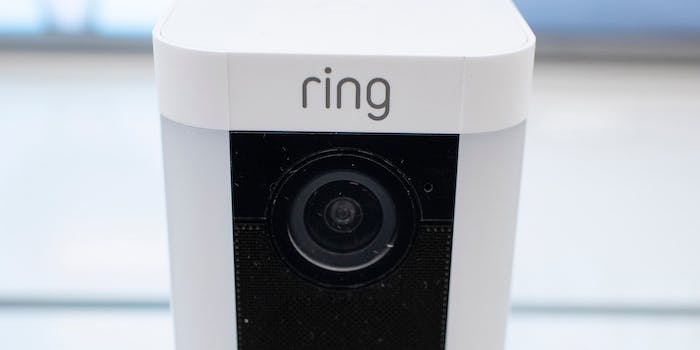 Calls grow for Amazon to end Ring partnerships with police

The retail giant has more than 1,000 Ring partnerships with law enforcement.

Calls are growing for Amazon to end law enforcement’s relationship with its Ring doorbell after the retail giant announced it would halt police use of its facial recognition software for one year.

More than 1,000 police departments and law enforcement agencies have partnerships with Amazon’s Ring doorbells, and privacy and civil liberties groups and advocates have long warned about the issues these partnerships raise.

Amazon’s surprise announcement to place a one-year moratorium on police use of its Rekognition software—a move that advocates have said does not go far enough—has brought renewed attention to the company’s ties with law enforcement and Ring.

Police departments can access videos captured by Ring users through a Neighbors app, by requesting footage uploaded on the app. All of this is done without a warrant. Earlier this year Ring allowed for users to opt out of getting police requests for footage.

These relationships have caught the attention of at least one member of Congress, with Sen. Ed Markey (D-Mass.) saying it was “an open door for privacy and civil liberty violations.”

The focus on the company’s facial recognition and Ring partnerships with law enforcement come as protests against police brutality and racism across the country have raised questions about law enforcement and surveillance.

As for Ring’s relationship with police, Cahn said it raises questions about privacy and surveillance, especially for communities of color.

“It’s continuing to enable the growth of the worst sorts of abusive, discriminatory police surveillance and creates this Neighbors platform where horrifically racists statements are made about people of color on a really frequent basis. You see it turning into a platform for crowd-based racial profiling,” Cahn said.

A report last year by Motherboard highlighted how people of color were more likely to be surveilled in the Neighbors app.

“We think, as we’ve constantly seen with every form of surveillance, more police surveillance means more police stops and more risk of police violence,” Cahn said. “George Floyd, his death showed just how deadly any police encounter could be. And Ring—especially when combined with the racial profiling we’ve seen from many Ring users—is creating a ticking time bomb for many people who are going to end up being encountered by the police simply because they were walking down a street.”

“Amazon claims they will stop allowing police to use their racist, inaccurate and dangerous facial recognition technology. However, Amazon, via Ring, continues, even now, to quietly sign agreements with police forces across the U.S., placing the surveillance state on our front porches,” Hayes said in a statement. “Ultimately, Amazon’s words are nothing more than a cover up story to draw attention away from how their technology is used to strengthen the power of an abusive state at the expense of Black lives.”

Last week the Electronic Frontier Foundation (EFF) launched a petition calling on Amazon to end its Ring partnerships with police.

“Despite Amazon’s statement that ‘the inequitable and brutal treatment of Black people in our country must stop,’ Ring plays an active role in enabling and perpetuating police harassment of Black Americans,” the EFF wrote. “Ring’s surveillance doorbells and its accompanying Neighbors app have inflamed many residents’ worst instincts and urged them to spy on pedestrians, neighbors, and workers. We must tell Amazon Ring to end their police partnerships today.”

The petition specifically says Ring’s partnerships “put community members and the general public at risk of racial profiling, overpolicing, and the potential for violence.”

Amazon did not immediately respond to a request for comment by the Daily Dot, including whether it was considering a similar moratorium on police partnerships with Ring.

Evan Greer, the deputy director of Fight for the Future, put it bluntly:

Fight for the Future also has a petition where people can sent their local elected officials a message demanding that their local departments not enter into partnerships with Ring.