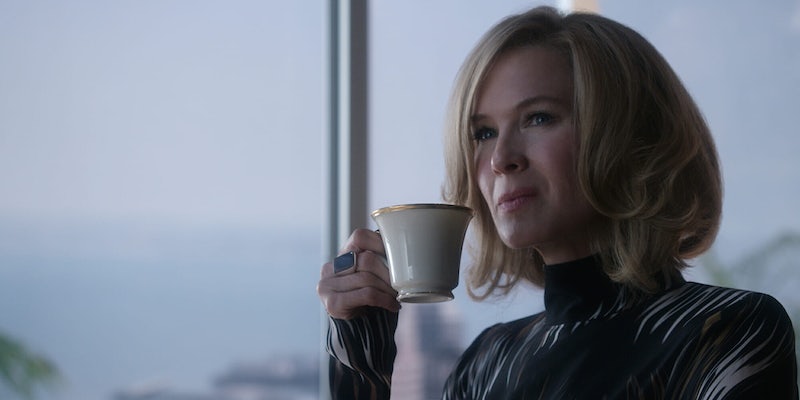 ‘What/If’ is virtually unwatchable, yet impossible to turn off

'What/If' is a show of grand nothingness, with just enough sugary calories to justify its own existence.

Netflix’s new, campy (maybe) daytime soap, the clumsy and predictable What/If, fails to accomplish any of the goals that show creator Mike Kelley (Revenge, Swingtown) set out to achieve. The series starts and ends a mishmash of unusual (and unnecessary) storylines, wooden acting, and oscillating tones, entirely confused as to what it’s trying to be. It represents the worst-case, logical extreme of Netflix’s algorithmic approach to original content: a show so ill-conceived that it’s virtually unwatchable, yet so audaciously bad that it’s impossible to turn off.

What/If essentially duplicates and expands on the foundation of 1993’s Indecent Proposal, with little nuance. An overtly sexualized Renée Zellweger leads the series as Anne Montgomery, a monstrous venture capitalist with an interest in Lisa Donovan (Jane Levy), who runs a small biotech firm on the brink of insolvency. Leveraged to the brim, Lisa finds herself positioned to accept Anne’s $80 million offer to spend one night alone with her husband, Sean (Blake Jenner), a former baseball star turned flamed-out EMS worker. Says Lisa: “This whole idea was ripped right out of a bad ’90s movie.” She means quite a few of them rolled into one.

The first season of What/If (and you know there will be more) is so laughably awful, you’d believe it to be a clandestine comedy. Kelley and his many directors pummel the viewer into submission through tidal waves of melodramatics. It’s almost as if Kelley openly challenged his writers to whip up the most ridiculous, yet tasty, marshmallow fluff ever put on television.

Some plotlines have absolutely nothing to do with the primary narrative. Given the show’s soap quality, these careless augmentations are expected, yet they stray so far from the path they almost feel like aborted ideas from other shows, attached to this one like Mr. Potato Head arms.

Zellweger, though, appears to be having great fun in her transition from A-list actress to Netflix trash queen, not unlike Liam Neeson’s shift from critically acclaimed dramas to high-stakes action cinema. She’s the only part of What/If worth watching, and you can’t take your eyes off her, a campy Bond villainess speaking primarily in grand platitudes about sacrificing for greatness. She devours the space available to her, nearly cannibalizing anyone else in the scene.

What/If somewhat succeeds in its gender inversions of the films and shows it emulates, e.g. Indecent Proposal, Fatal Attraction, and former ABC series Revenge (which Kelley also created). Women and people of color star as the show’s protagonists (and, in Montgomery’s case, antagonists). But the show undercuts its own victory by never providing viewers with the wink and smile to inform them that this is supposed to be cheap fun. Is it, or is it not, a soap?

Because of this lack of clarity, What/If winds up just being bad television. Most of the writing is nonsensical, the plotting ludicrous, and the acting more wooden than a forest of Sam Worthingtons. It’s a show of grand nothingness that, like Netflix’s most offensively mediocre original series, has just enough sugary calories to justify its own existence—but nothing else. If you’ve made to the end of the series only to witness the nonsensical endings of various plotlines—congratulations, you did it! And if you stopped after the first episode—congratulations, you did it!