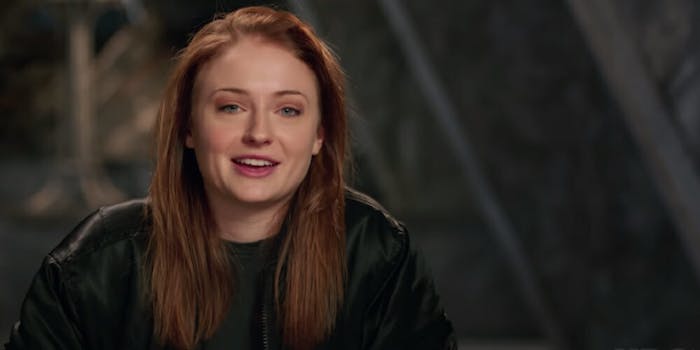 It foreshadowed who ended up on the throne.

This article contains spoilers for Game of Thrones.

Sophie Turner was shocked to see that a Game of Thrones season one poster foreshadowed who would end up on the throne in the season finale.

Turner was doing an interview with Metro, along with Jessica Chastain to promote their new movie, X-Men: Dark Phoenix.

Chastain pointed out the hint on the poster.

The poster depicts Ned Stark sitting on the throne, with a raven right next to him. Ned was beheaded in season one, so it was impossible for him to win the game of thrones. That leaves the raven aka Bran Stark, who became the Three-Eyed Raven throughout the series.

Much to fans’ dismay, Bran ended up being crowned king of Westeros after Tyrion Lannister asked Bran if he would “wear the crown” in the season finale.

“Why do you think I came all this way?” Bran responded.

Even though viewers thought the last season was rushed and improvised, the poster’s foreshadowing shows us that the ending has been planned since the beginning.

It could also be just a really weird coincidence that a raven appeared on the throne.

Turner’s character Sansa Stark made herself Queen of the North after declaring it an independent kingdom. Turner is set to play Jean Grey in Dark Pheonix.

Dark Pheonix is slated to premiere on June 7.