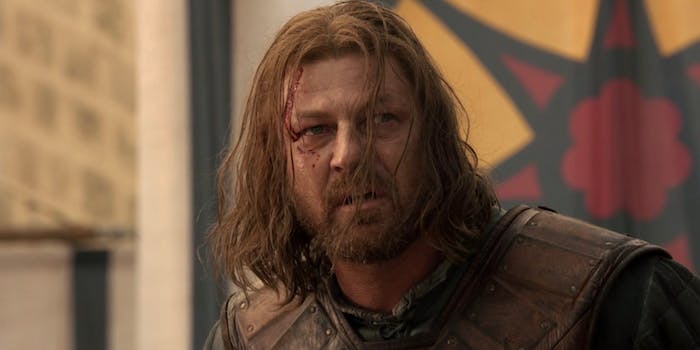 As Game of Thrones comes to an end, the show will begin wrapping up some of its biggest mysteries. But some of the smaller ones will also be resolved along the way as one of Game of Thrones’ original cast members answered a question fans have been wondering for years.

Ned Stark’s death in the first season of Game of Thrones was a shock to those who had only seen the show, one that still had consequences all these years later. There’s a lot going on at the Great Sept of Baelor between Arya’s attempt to reach Ned just before she’s stopped by Yoren from the Night’s Watch and Sansa’s screams. But in his final moments, Ned takes a moment to himself and mouths some words just before he’s beheaded by his own sword.

For years, fans have attempted to figure out what—if anything—Ned is saying in those moments. Is it a confession? A cursing out of the bastard king who condemned him to death? A prayer? Gibberish? Sean Bean, who played Ned on-screen, has some insight, and it’s not nearly as interesting as we think it might be.

In an interview with HuffPost, Bean revealed that in his final moments, Ned was simply praying.

“I couldn’t be too specific, because I don’t know if religion [like that] was around in those days, whatever they were,” Bean explained. “I just thought, ‘What would you do if this were really gonna happen?’ You probably would pray. You probably would murmur some words and you’d keep it quiet. You’d keep it to yourself. It’s quite subtle in that many people wouldn’t pick it up. It was an interesting thing to do for me at that point. There’s not much you can do really, you’ve got your head on a block. That’s about the only thing you can do is murmur.”

The explanation does fall in line with what we know about Ned. He was a fairly religious man who followed the ways of the old gods, and as he was about to die, Ned had a lot on his mind (apart from his impending death, that is). He had one daughter in the hands of the Lannisters and another who was in the crowd and hopefully safe in the hands of the Night’s Watch. He could probably only imagine what would happen to the rest of his family in the aftermath. His time was over, so all he could really do was pray—and so he did.

It’s an insightful look into Ned’s mind, but as far as mysteries go, it’s just a bit anticlimactic. But hey, at least we didn’t have the truth about Jon Snow’s parentage under our noses this whole time.