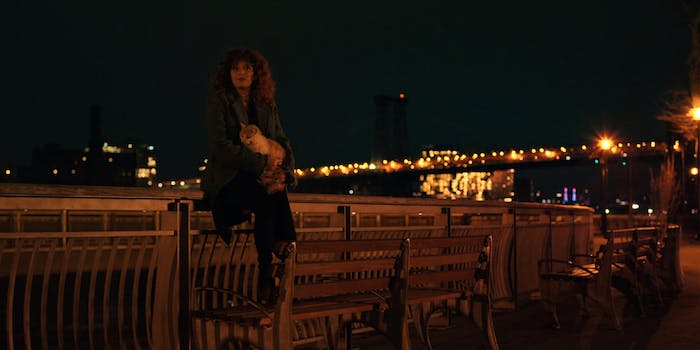 Sure, it's about time loops. But is it also about Tompkins Square Park?

Russian Doll, the new existential dramedy from Natasha Lyonne, Leslye Headland, and Amy Poehler, is one of those beautiful puzzles that’s open to interpretation. Lyonne stars as Nadia, a 36-year-old East Village denizen who’s hit by a car on the night of her birthday party, only to end up back in the bathroom of said party. Across eight episodes, Nadia has to figure out her death/rebirth cycle, which comes into focus when she meets Alan (Charlie Barnett), who’s also stuck in a loop.

In the final episode, “Ariadne,” Nadia and Alan figure out what they have to do to move on from these self-destructive loops: They have to help each other out of this labyrinth and save each other’s lives. In the final scene, two different Nadia and Alan timelines emerge and then collapse as they join a parade led by Horse, a homeless man Nadia meets outside the park. A somewhat heavy show gets a jubilant, left-field ending, and it appears the two characters keep on living.

The beauty of Russian Doll is that interpretative flexibility—it could mean anything!—but there are of course theories about the ending and more.

In the finale, we see at least two other Nadias pass the parade Nadia, which some viewers have taken as the existence of a multiverse. It’s an easy theory to propose, and some theorists have suggested that Horse (Brendan Sexton III) has something to do with it; the final episode, “Ariadne,” is named after the Greek figure who helped Theseus escape the Labyrinth after defeating the Minotaur (though in the parade scene Horse is wearing a deer mask). The concept of the “Russian doll” has even been applied to a theory about our own universe being part of a larger universe and the manifestation of dark energy.

New York Times critic Jason Zinoman proposed a grand historical theory on Twitter: The series is a contemplation of New York City’s Tompkins Square Park, which had long been a space for the cultural fringe. In August 1988, police clashed with protesters after a curfew was enacted for the park. In 1991, Mayor David Dinkins closed the park to the homeless and gentrification crept in. In one episode Nadia randomly asks her ex, “Remember Dinkins?” She also meets (and re-meets) Horse outside the park. He suggests the show is attempting to reconcile the new Tompkins (Alan) and the old (Nadia).

I see this show is an against the grain meditation on the cultural guilt about the Tompkins Square Park Riots. Sounds crazy? Pretentious? Nonsense? You’re right. But hear me out. Or don’t. 2/

The show is shot almost entirely inside and around the park. The park appears ghostly, stunning, magical. But its POV on past is ambivalent, encapsulated in this exchange: “Remember littering?” Remember Dinkins” 6/

For those of us who don’t live in New York City or know the deep history of the East Village and Alphabet City, this theory might not present itself. However, Headland and Lyonne seemed to confirm Zinoman’s theory on Twitter. Headland told Thrillist that the parade at the end is a nod to Fellini, but it also “felt like it was such a New York thing. You would just come around a corner and suddenly there’s a parade happening, and you’re like, ‘Oh, well I guess we’re part of this now.’”

Nadia is a video game developer, and there are several references to games and code. In the episode 1 scene where she’s coding, a poster that reads “Ariadne” can be seen to the left of her screen.

[Russian Doll S01E01] Natasha Lyonne codes in green cause she’s such a badass. Also a 3D model for some reason. from itsaunixsystem

In episode 7, Nadia references a “bug in the code” when trying to explain to Alan how time works in their loops and suggests they “rewrite” their initial meeting in the deli to “fix a flaw in the code. Then, we run a unit test.” Are the renewing and decaying timelines of Alan and Nadia—and the disappearing fish, cats, and acquaintances around them—lines of code being added or removed? Is Nadia dying over and over again a “unit test”? Is Nadia fixing her code in real time?

4) The Oatmeal/Emily of New Moon connection

Oatmeal: bringer of death? Nadia’s missing cat signals her first death, then later he literally disappears as she’s petting him. Is Oatmeal able to jump between realities? What is the connection between Oatmeal and the animal-adjacent Horse? As pointed out by Screen Rant, Oatmeal looks a lot like the cat on this particular cover of YA novel Emily of New Moon, a book about an orphan sent to live with relatives, which parallels Nadia’s relationship with Ruth. Emily also has a cat named Saucy Sal. Nadia references the book throughout the show and gives a copy to her ex’s daughter, Lucy. Emily and Anne of Green Gables were both written by Lucy Maud Montgomery.