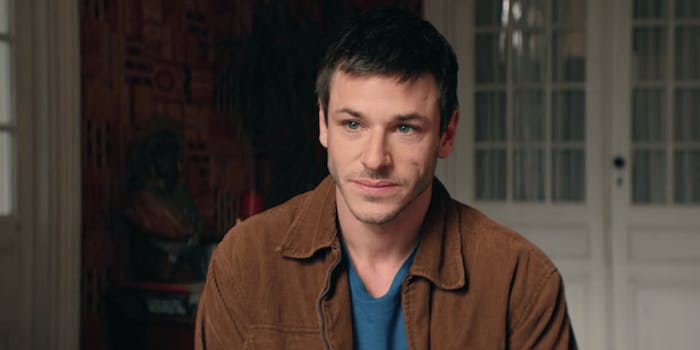 One of the big challenges of great ideas is that they’ve often been done better elsewhere. Such is the case with the new French drama series from Netflix, Twice Upon a Time.

Twice Upon a Time

RELEASE DATE: Dec. 19, 2019
CREATOR: Guillaume Nicloux
STREAMING: Netflix
A heartbroken young man stumbles through a dimensional rift that allows him to spend more time with his ex, and try to find some larger answers about his life.

Vincent (Gaspard Ulliel) and Louise (Freya Mavor) have broken up. Vincent, as is often the case with young men, isn’t sure why their relationship came to an end. After four months of self-medicating in the depths of his post-breakup malaise, he is delivered a second chance. A strange wooden cube is delivered to his home that turns out to be a portal to an alternate dimension where Vincent and Louise are still dating, or at least, still seeing each other and having passionate sex between cigarettes.

If this sounds familiar, that’s because it is. Though the conceit is a memory-erasing procedure and not an extra-dimensional portal, Eternal Sunshine of the Spotless Mind used a light bit of sci-fi to explore the same themes. Last year’s Maniac opted for a clinical pharmaceutical group setting for a similar story, and though they are more about self-love than romantic love, we can place Russian Doll and Groundhog Day in this sub-genre of romantic story skewed by a little bit of dimensional elasticity.

Twice Upon a Time is in good company to be sure. Unfortunately, this good company is uniformly better than Twice Upon a Time. Groundhog Day is funnier, Russian Doll is trippier, Maniac has more visual panache, and Eternal Sunshine of the Spotless Mind stands above all of them as a legitimate masterpiece.

This isn’t to say Twice Upon a Time is terrible, exactly. If the story had been a straightforward tale of a man unsure why he lost his love, it might be more tempting to take the series on its own merits. There are well-acted scenes and thoughtful moments, and if it didn’t take so much effort to keep dimensions straight, you might appreciate them more. But, because of this science-fiction device, the series is hard to consider without comparing to better work.

If American film and television deserve one huge criticism (and there are many you could throw at it), it is that everything is too big: A sledgehammer is so often used when a flyswatter will do. The inverse is true of European cinema. Sometimes filmmakers trust that complex ideas can be conveyed with a glance here and a sigh there. When that works, you get this year’s best French film, Portrait of a Lady on Fire. When it doesn’t, you get a middling, pretentious product like Twice Upon a Time.

The second episode of the four is the weakest the series. In the first half of that installment, Vincent goes to therapy to talk about how he feels about the cube and the other dimension instead of, you know, doing anything particularly active regarding the interdimensional rift he just found. The back half of the episode is spent following Vincent and Louise on an uneventful weekend getaway in the other dimension.

After two full episodes, the Twice Upon a Time does start to engage a bit with the central mystery of the series, but it is all too little too late. In fact, it is difficult to call the mystery central because it has been such an afterthought up to that point.

This series is so subtle it ends up being confusing. Is Vincent trying to uncover some mystery in this other dimension? Does he know deep down why Louise left him and want to make amends? Do these characters love any of the various other suitors and one-night stands we meet through the course of the show? It’s anyone’s guess, and it is difficult to make guesses across dimensional rifts.

As with many similar projects of this sort, Twice Upon a Time likes to drop philosophical ideas about love and romance from time to time. One line that stuck with me was, “Relationships are all the same, but no one experiences them the same way.” That may be true, but the audience needs to at least understand how the artist wants us to experience them, and Twice Upon a Time is far too muddled to accomplish that goal.

Twice Upon a Time could use a piece of advice that so many other artists could use as well: Before you start trying to tell a universal story, make sure you are telling an interesting story. That part is so much more important, no matter what dimension you might be in.