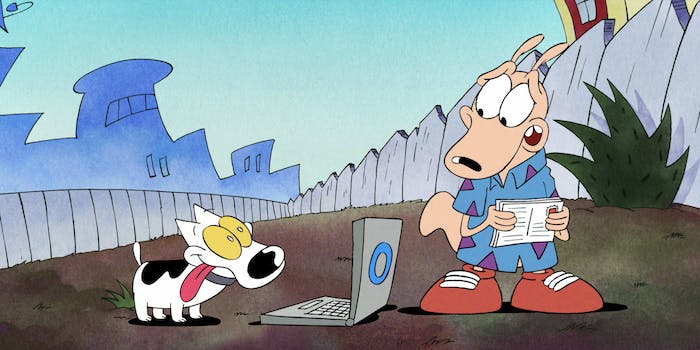 ‘Rocko’s Modern Life: Static Cling’ is one of the best ’90s revivals yet

The show embraces nostalgia while also cautioning against too much of it.

It’s a strange time to have been born in the mid-to-late ’80s. Nearly everything from our childhood—movies, cartoons, toys, music—is currently being repackaged and resold to us in a slightly altered, modernized form. It’s not that the products themselves have been improved; it’s that in a difficult, frightening time, nostalgia itself has become a hot commodity. As a child of the original Nicktoons generation, I expected Netflix‘s latest ’90s revival, Rocko’s Modern Life: Static Cling, to be yet another soulless regurgitation. Instead, the 45-minute special is a thoughtful meditation on how we respond to our rapidly shifting world.

Static Cling follows Rocko, Filburt, and Heffer as they return to O-Town after spending 20 years drifting through space. While Filburt and Heffer immediately embrace the 21st-century lifestyle of smartphones and VR, Rocko can’t seem to get comfortable with the change. Learning that his favorite show, The Fatheads, has been cancelled is the straw that breaks the wallaby’s back. Meanwhile, O-Town gets hit with a major recession thanks to a clerical error by Ed Bighead. In an attempt to soothe himself, with the convenient side effect of saving the town, Rocko seeks out the creator of his favorite show, the long-missing Ralph Bighead, to revive The Fatheads.

The first bits of footage, which featured Rocko’s uneasy reintroduction to modern society, failed to inspire faith, as did early interviews with series creator Joe Murray wherein he stated the special would be about “technology.” It looked like the kind of finger-wagging at millennials that pervades the media today, scolding us for our obsession with screens and killing outdated industries like casual dining restaurants and diamond mining.

I’ve never been so happy to be so wrong.

Static Cling approaches its themes with startling nuance. Rocko, a nervous wreck after bearing the brunt of the 21st century’s unfamiliar hazards, clings to The Fatheads like a security blanket, as it brought him comfort and happiness during his 20 long years in space. O-Town’s crashing economy gives Rocko the perfect excuse to convince the Bigheads to help him find Ralph, who left years ago on a quest to find himself. After a lengthy international hunt, Rocko, Heffer, and Filburt finally find Ralph, only to find she’s transitioned to a woman named Rachel.

While working on Static Cling, Murray consulted GLAAD to make sure his depiction of Rachel stayed respectful. Rocko’s Modern Life always had a progressive heart; it just couldn’t state things directly because of the era’s standards for children’s television. The result is lovely, consistent with the reality that many trans women face without ever dipping into sensationalism. Rachel, so bitter and angry in the TV series, has found comfort and contentment in her transition. Rocko, Heffer, and Filburt accept her readily and joyfully after taking only a few moments to process the news.

Rachel embodies the themes of Static Cling more than anything else. Change isn’t necessarily bad—it was essential for her to realize her fullest potential and live life on her own terms. Her father, Ed Bighead, rejects her transition at first. There’s too much change happening in his own life, and, like Rocko, he feels displaced and disoriented. But clinging to the past and refusing to accept things as they are will only isolate him from his precious only child and destroy the town.

Even though Static Cling arguably only exists because of ‘90s nostalgia, it has a complex relationship with the concept of nostalgia itself. Nostalgia can be empty and corporate, like many of the live-action Disney remakes designed to separate people from their cash. Nostalgia can be paralyzing, as its victims languish longing for the past instead of experiencing the present and looking toward the future. But nostalgia can be warm and inspiring, as we embrace a present that only exists because of who we were and the choices we made in the past. Static Cling cautions against the former two while warmly depicting the latter.

Not that it’s all thoughtful meditations. There are still plenty of gags to be found, striking the perfect balance of thoughtful references, surrealism, and gross potty humor. With a lesser script, the fart jokes would break the pacing and mood, but the comedic beats blend seamlessly with the emotional content.

It’s remarkable how all the moving parts of Static Cling coalesce in one perfectly paced, thematically coherent special that’s still consistent with the old show’s appeal. The TV series’ bright, hand-drawn style translates gorgeously into high-definition, winking at the audience as Bev Bighead talks about how modern cartoons are all widescreen and “in PhD.” Voice actors fall perfectly back into their old roles, bringing the right energy to the gags and emotional weight to the lengthier speeches.

Rocko’s Modern Life: Static Cling is one of the best revivals to come out yet. It simultaneously embraces the past and the present, while turning a critical eye to both. It shows there may still be life in the old franchise, but if the creators never make another episode, this would serve as a perfect endnote to the series.