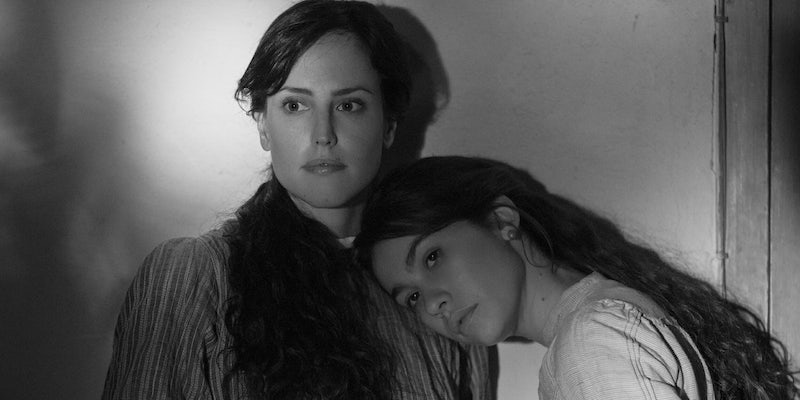 The hackneyed period drama is based on the story of Spain's first recorded same-sex marriage.

The film begins in Argentina in the late 1800s and works its way through the Spanish-speaking world as it tells the story of two women who were married in 1901. Making the story even more remarkable is the fact that one woman, Elisa, had to disguise herself as a man named Mario Sánchez in order to trick the priest into marrying the couple. This story still resonates today, as many countries have not yet legalized gay marriage. It goes without saying that these women were heroes, but it’s hard to shake the feeling that we’ve seen this story told better elsewhere.

Elisa & Marcela shows plenty of promise at first. In addition to the thoughtful photography, Greta Fernández shines as Marcela, a bright-eyed teenager with an innocent urge to explore what the world has to offer. Natalia de Molina is less charming as Elisa, but she’s still intriguing as the older, mischievous, and slightly more worldly student who takes Marcela under her wing.

The two women fall in love almost immediately, and while the young actresses at the center of the film do their best to animate this love story with passion and curiosity, they just don’t get much to do. Five minutes into the film, they’re breathlessly in love; minutes later, the standard litany of obstacles—gossipy nuns, disapproving parents, draconian laws, and intolerant, brutish men—stands in the way of their romance. These adversaries lumber toward the protagonists, resulting in a two-hour film that feels like an eternity.

If you’ve seen a period piece about forbidden, same-sex romance—be it Brokeback Mountain, Carol, The Haindmaiden, or A Single Man—you will likely be able to predict every one of Elisa & Marcela’s hackneyed plot points long before they unfold. You’ll also wish you were celebrating Pride month by watching one of these much better films, or one of Netflix’s more effective original programs about the LGBTQIA community.

Soon, though, the film is once again stymied by its flat script. “Boarding school or a convent, you decide,” Marcela’s abusive father says before literally dragging her through the mud, in a moment that will make even the biggest fans of maudlin period dramas roll their eyes.

You’ll root for the film to work until the two protagonists have their long-awaited sexual liaison around the halfway mark. Though the film presents Elisa and Marcela as repressed and unsure of their sexuality up to this point, the sex scene is overlong and aggressive, verging on softcore pornography. The couple’s cautious, charmingly awkward interactions get replaced by sucking toes, expert attention to each others’ nipples, and other moves that two young, virginal Catholic girls would be hard-pressed to acquire before the era of internet porn. (There’s one particularly ludicrous move involving an octopus, which you may want to add to your own arsenal if you’re kinky.)

If there’s one positive takeaway from Elisa and Marcela, it’s that in 2019, viewers can take their pick of far better films about the LGBTQIA experience, rather than settle for this uninspired romp.