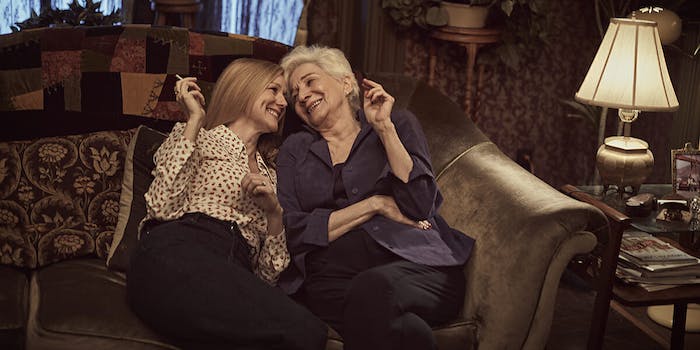 The influential and beloved story continues in a very different San Francisco.

When author Armistead Maupin’s Tales of the City was originally created for TV in 1994, the story that celebrated the LGBTQIA community in San Francisco was promptly canceled.

Tales of the City

In the Tales of the City revival, Mary Ann (Laura Linney) revisits present-day San Francisco to celebrate the 90th birthday of Anna, the transgender landlady who’s home at 28 Barbary Lane has been a safe haven for the LGBTQIA community for decades. Upon being reunited with her adopted daughter Shawna (Ellen Page) and ex-husband Brian (Paul Gross), Mary Ann decides to stick around 28 Barbary Lane—right when Anna needs her family-by-choice most.

The Netflix limited series continues the story of the books, complete with several familiar characters, which began in 1978 and garnered acclaim for their humanist depictions of marginalized people in a distant version of San Francisco. Mary Ann Singleton was the wide-eyed guide who moved there and met warm and real people. But more than just a reunion special, the new series finds relevance in a very different city and offers compelling, interconnected vignettes.

Although the original Tales of the City was groundbreaking, it painted a whitewashed picture of the LGBTQIA community in the Bay Area—just like most coming-of-age films. It’s refreshing and relieving that the showrunners brought in a diverse and multi-dimensional cast—comprised of actual LGBTQIA people playing LGBTQIA characters—for the new series. It’s multi-generational, racially diverse, and boasts a spectrum of lived experiences.

Showrunner Lauren Morelli assembled an all-LGBTQIA writers’ room and it shows, with thoughtful, nuanced, and relatable scripts. Unlike recent “woke” Netflix films and TV shows that quietly turn the gender spectrum into a punchline, Tales of the City acknowledges it sincerely through compelling characters and complex relationships. The portrayal of Jake (Garcia), for example, who is a transgender person undergoing emotional changes after their transition, has depth and authenticity. Their relationship with their partner Margot (May Hong) becomes strained when Jake realizes they are attracted to men and Margot struggles to balance respecting Jake’s transition with her own desires in their relationship.

Critics might accuse Tales of the City of leaning in too heavily on gender politics and labels in the series, but it’s a sincere representation of how people are talking about gender in 2019. This is captured by the Tales of the City writers in a dinner party scene where Ben (Charlie Barnett)—a young, Black gay man—tells a room full of older, white members of the LGBTQIA community that it’s offensive to use the term “tranny.” The older folks become offended because they feel that after surviving the A.I.D.S. crisis and watching their friends die at Ben’s age, they do not deserve to have their language policed. Ben, however, points out that correctly identifying someone’s gender and sexual preference merely provides people a sense of dignity—which is exactly what Tales of the City accomplishes by including a wide range of experiences and perspectives.

Tales of the City remains a love letter to San Francisco and the freedom the city affords to its residents to love and live freely—even as it becomes swallowed up by corporate tech giants. In the first minute of the series, a documentarian asks Anna, “You don’t think the city’s changed?” Anna’s answer encapsulates the heart of the series: “Well, we’re still people.”