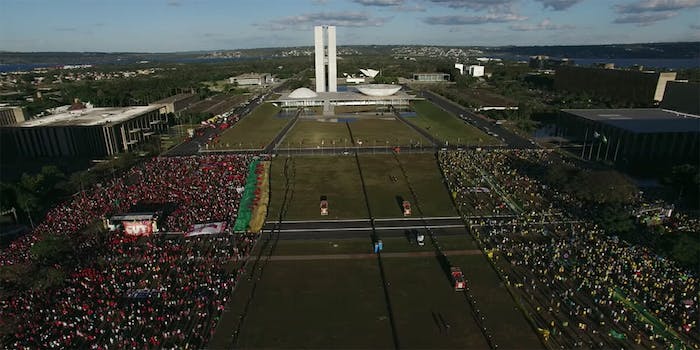 The documentary follows the impeachment and imprisonment of two of Brazil's former presidents.

In Netflix documentary The Edge of Democracy, Brazilian filmmaker Petra Costa (Elena) shares what she perceives as the rise and fall of democracy in her native country.

The Edge of Democracy

As both Costa and the democratic status of Brazil reach their thirties, Costa says she had “hoped that [they] would both be standing on solid ground,” but fears the country is moving backward instead. She documents the nation’s political landscape for the past three decades through both the lens of her personal experience as a working-class citizen and footage of the country’s leaders. In a little over two hours, Costa attempts to deconstruct the nation’s complicated relationship with democracy, sharing a cautionary tale for any nation struggling with political division and corruption.

The Edge of Democracy begins with the creation of Brazil’s Workers’ Party in 1980—one of the biggest political movements in Latin American history—which effectively ended the reign of the country’s military dictatorship. It covers the rise and eventual election of Lula da Silva as president of Brazil, as well as his successor Dilma Rousseff. As leaders of the democratic socialist party, they created popular social welfare programs, such as Bolsa Familia, which helped much of Brazil’s lower class escape poverty.

Despite the Workers’ Party’s success, Silva and Rousseff both fell victim to corruption in a government-wide money laundering scheme known as Operation Car Wash, leading to widespread mistrust. Rousseff was impeached in 2016, and by 2018, Silva was sentenced to 12 years in prison. Meanwhile, the political landscape of Brazil experienced a dramatic upheaval, and the country divided into two factions—those who support Silva and Rousseff and those who do not—leaving an opening for right-wing conservative Jair Bolsonaro to be elected president in 2019.

Costa attempts to unpack all of this in The Edge of Democracy, and it becomes hard to follow halfway through the documentary. With parents who are members of the Workers Party, Costa makes an interesting narrator, and it’s not difficult to guess where her bias lies; she shares that she voted for Silva when he ran for president and hoped he’d end poverty in Brazil.

The Edge of Democracy offers viewers unprecedented access to Brazil’s political leaders and features several interviews with Silva and Rousseff; Costa was with Rousseff moments after she was impeached and was with Silva the day he was arrested. As open as Costa is about her relationship with the Workers’ Party growing up, she doesn’t explain how she earned this access. It makes you wonder if there’s a correlation between Costa’s access to the presidents and the rosy picture she paints of their character.

Regardless of bias, Costa warns how political corruption and widespread mistrust in government can threaten the existence of democracy in any country. It’s easy to see parallels between Brazil’s past 30 years and the United States’ current struggles. Analysts already point out similarities between Bolsonaro and Donald Trump, including how they each were elected on the coattails of corruption and exploited voters’ mistrust in their opponents to win their elections. American viewers who watch The Edge of Democracy will see an eerie reflection of their own political landscape.