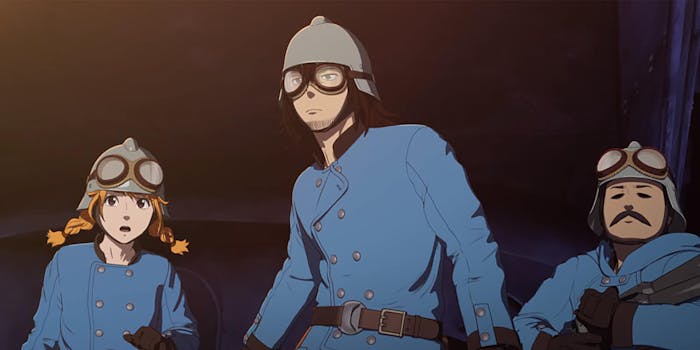 The anime is centered around dragon hunters, but it closely parallels whale hunters.

The story opens on the Quin Zaza, a dragon-hunting—“draking” in the show’s parlance—airship. The crew has just brought down a dragon, and is in the middle of breaking it down and selling its meat, rendered oil, and parts to the nearby villagers. The ensemble cast includes Takita, a cheerful young novice who is basically every perky anime heroine ever; Mika, a man driven to kill and eat as many dragons in as many ways possible; and Giraud, a young man following in his father’s footsteps.

Drifting Dragons was produced by Polygon Pictures, the studio responsible for many of the 3D CG anime on Netflix. The bright colors and atmosphere is a nice shift from the brown-and-grey aesthetic they usually use, but it’s often a bit too bright, and the characters are so round and smooth they look a bit like inflated rubber. So much that, with their pragmatically baggy flight suits from the manga rounded out, it looks like they all have extremely pear-shaped figures.

The dragons come off significantly better, possibly because they bear little resemblance to traditional dragons. Each of these huge creatures looks different, but every single one is strange and otherworldly. The CG works well in this regard, building a sense of threatening solidity in addition to their strangeness. They would be right at home among the Ohmu of Miyazaki’s influential Nausicaä of the Valley of the Wind.

In fact, much of the show’s design aesthetic comes from Nausicaä. The drakers’ uniforms resemble Nausicaä’s famous blue flight suit, and Giraud, with his black bob, would fit right into any of a number of Miyazaki films. The similarities become even more pronounced when you compare the two mangas’ gritty, detailed art styles. However, while Nausicaä was about understanding and living in harmony with even the most terrifying aspects of nature, Drifting Dragons is about killing and eating it.

It creates an odd dissonance that never dissipates as the show goes. There’s a lack of sense for where exactly dragons fit into the cultures of this world. About midway, Mika introduces Takita to a tribal culture that makes art out of dragon hides and reveres them as they hunt them, but none of the drakers seem to come from that culture.

Humans, by and large, seem to view the dragons as somewhere between a threat and a commodity, and while the drakers make lip service to loving the vast creatures, they continue to slaughter them. In one arc, Takita adopts a baby dragon after killing its mother, and feeds it mayonnaise made from its mother’s body. That’s not respectful; it’s macabre.

With the lack of clear cultural context within the show, we viewers have no choice but to substitute our own. I’m not vegan, and I understand the necessity of certain kinds of hunting. But Drifting Dragons isn’t about that kind of hunting; it’s about whaling and the thrill of taking down big game and triumphing over something much greater and powerful than yourself. It romanticizes a particularly controversial topic, and a form of hunting that still has potential to drive several species to extinction and cause untold environmental devastation. The dragon meat even looks like whale meat.

Those less sensitized to political and environmental issues in their media may still find a lot to like about Drifting Dragons. The action scenes are tense and creative; since every dragon is different, every hunt is different, and it never gets formulaic. The ensemble cast plays off each other well with strong chemistry, and even the minor characters have distinctive personalities. Had it been explored more thoroughly, their different reasons for getting into draking could have made for some strong character beats. The food, easily the most appealing visual element and animated in long, lingering shots of sizzling fat and deep red, marbled meat, looks positively appetizing.

However, it remains that it feels as weightless and drifting as the titular dragons. There’s a lack of real narrative follow-through or point of view that killing and eating dragons is really cool and romantic. It needs something to ground it, to make it about something. This lack of thematic ideas and worldbuilding make it hard to see it as anything but pro-whaling propaganda.

Last year, Japan withdrew from the International Whaling Commission and resumed commercial whaling. The topic is at the most contentious it’s been in years. Perhaps releasing Drifting Dragons was designed to destigmatize the practice and make people who would otherwise be opposed more receptive. I doubt there was that much deliberate thought behind it, but the timing on this anime adaptation seems either opportunistic or tone-deaf, depending on which side of the debate you fall on.