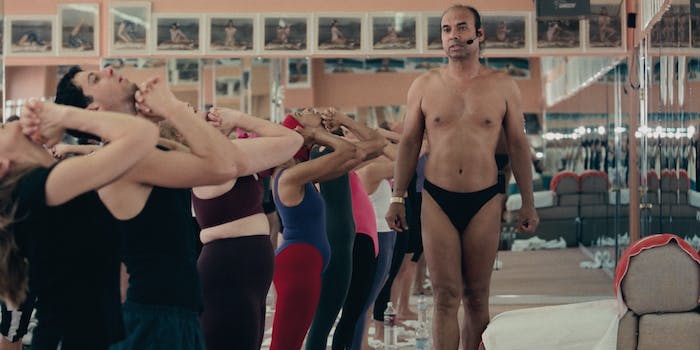 ‘Bikram’ is not a great film, but it is a document of justice

An imperfect film sheds light on the harrowing abuses of the world's most famous yogi.

One of the most difficult things a critic has to do is write a negative review of an important story.

There is no denying that the victims of Bikram Choudhury deserve to be heard. There is no denying the Bikram Choudhury has been accused of serial rape and abuse and deserves criminal punishment, public shaming, and financial ruin for any crimes he has committed. But those facts don’t change the quality of the filmmaking, which has to be a part of any review. As a gesture toward justice, Bikram: Yogi, Guru, Predator succeeds. As a film, it is mediocre.

RELEASE DATE: 11/20/2019
DIRECTOR: Eva Orner
STREAMING: Netflix
The harrowing story of a wealthy yoga guru who used his power to prey on women isn’t a new story, but it is an important one.

Bikram: Yogi, Guru, Predator is a fairly straightforward, talking-head–driven story of how Bikram Choudhury built the Bikram Yoga empire and subsequently used his wealth and power to harass and allegedly assault many of his students.

When directing a story like this, the filmmaker has a challenge. Giving the victims a space to tell their truth and relating the facts in a linear and accurate manner feels like a responsibility in a situation like this. However, that approach doesn’t always make for the most compelling film.

For the most part, Bikram is a cut and dried document of the yoga guru’s alleged abuses, and while it is important for people to know this story, the filmmaking often feels like it is presenting evidence or a journalistic report. There isn’t a lot of space between the directorial choices you would see here and what you might encounter in a 60 Minutes exposé on a similar topic.

When the film isn’t focused on interviews with victims, the material feels stretched to meet its run-time. Too much b-roll, distracting side stories, and talking head perspectives that don’t seem that important cloud rather than illuminate the central issues of the story that might have been more powerful in a concentrated hourlong piece.

The film relies on the larger-than-life character of Bikram for drama, and while Choudhury is certainly an almost unbelievable figure, as a viewer, you find yourself wishing that the director had added more narrative shape onto the piece or else limited the film totally to a series of victim interviews.

In terms of the rote facts, Choudhury’s story is fascinating and terrifying. He is largely responsible for yoga becoming commonplace in the United States, as he franchised his Los Angeles studio into a global sensation. At the height of his influence in the late ’90s and early 2000s, he was interviewed in many magazines, newspapers, and on various primetime news programs. His movement was called “McYoga,” as he made a fortune franchising his method.

As he rose to prominence, Bikram franchises became a highly sought-after commodity; Choudhury would hold massive nine-week training seminars at hotels around the world. According to lawsuits filed in 2013 and 2014, he used these seminars as a systemic means of identifying, grooming, and forcing himself upon women whom he raped.

The most powerful portion of the film, and probably close to a third of the film’s runtime, is spent allowing Bikram’s victims to speak. They recount in detail how they came to be associated with Bikram Yoga and tell their stories of being raped by Choudhury or share when they found out that people they knew were raped.

Regardless of the quality of the film, this remains an important story, and recording the testimonies of these women is a powerful act. As the documentary makes clear, Los Angeles district attorney Jackie Lacey has declined to bring criminal charges against Choudhury. Giving this story a platform in the streaming and social media era offers the possibility that this documentary could lead to justice for his victims. That, ultimately, is more important than artistry.

Bikram: Yogi, Guru, Predator is not a great film. But, perhaps in the scheme of things, that doesn’t matter. It is an attempt at justice, something that few people get a chance to put out into the world.