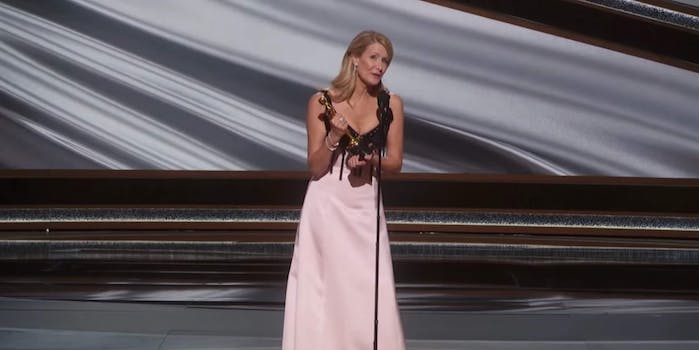 Out of 24 nominations, it only won two awards.

Netflix came into the 2020 Oscars with a historic 24 nominations spread across eight films and documentaries, some of which were made by living legends. But by the end of Oscar night—which culminated in a groundbreaking best picture win for Parasite—Netflix only walked away with two Oscars, a haul that’s slightly down from last year.

The streaming giant’s wins, which went to Laura Dern for supporting actress in Marriage Story and American Factory for feature documentary, were largely expected; they were the frontrunners in their respective categories. Dern’s win gave Netflix its first acting Oscar while American Factory was the second documentary feature win for Netflix after Icarus won in 2018.

Netflix’s victories arrived in close proximity to one another, the first of which went to American Factory, which centered on an Ohio automotive factory purchased by a Chinese billionaire and the cultural clash between its American and Chinese workers. It’s produced by Higher Ground, Barack and Michelle Obama’s production company, which might have initially led some to believe that the Obamas were Oscar winners.

They aren’t: The Oscar was awarded to co-directors Steven Bognar and Julia Reichert and producer Jeff Reichert. Julia Reichert, who is battling cancer, praised her fellow nominees for the work they risked their lives to create and the universal story within her own documentary.

“Working people have it harder and harder these days, and we believe that things will get better when workers of the world unite,” she said.

Shortly after, Dern won her first Oscar for actress in a supporting role, giving Marriage Story its only award of the night. In her speech, Dern touched on the love stories in her life and paid tribute to her own heroes.

“Some say, never meet your heroes,” Dern said. “But I say if you’re really blessed, you get them as your parents. I share this with my acting heroes, my legends, Diane Ladd and Bruce Dern. You got game. I love you.”

Dern’s win for Marriage Story was also the only Netflix film to win any Oscars this year after Roma won three Oscars last year, which resulted in the five other Netflix films nominated for Oscars going home empty-handed. (Life Overtakes Me was nominated for documentary (short subject), but it lost to Learning to Skateboard in a Warzone (If You’re a Girl).)

Thanks to Into the Spider-Verse’s groundbreaking win last year and major wins for Netflix at the Annie Awards and the BAFTAs, some thought that Klaus had a chance to win best animated feature film. But the Oscar went to Toy Story 4, the latest Pixar film to win in a category that Disney has largely dominated. (The French Netflix film I Lost My Body was also nominated in the category.) The Irishman (10 nominations) and The Two Popes (three nominations) went home without winning any Oscars while Marriage Story (six nominations) lost most of its categories.

The Two Popes had two acting nominations for Jonathan Pryce and Anthony Hopkins and an adapted screenplay nomination for Anthony McCarten, but those awards went to Joaquin Phoenix, Brad Pitt, and Taika Waititi—all of whom have been winning major awards all season. Marriage Story’s acting nominations outside of Dern (Adam Driver and Scarlett Johansson) were a longshot at best while the film’s score lost to Hildur Guðnadóttir for Joker and Noah Baumbach lost original screenplay to Bong Joon-ho and Han Jin-won for Parasite. (It also didn’t have much of a shot to win best picture.)

Martin Scorsese’s epic had its fans, but not everyone was a fan of the de-aging technology used in The Irishman and a recurring thread and criticism about the film is how long it is; even Chris Rock, during a segment that more or less served as the hostless Oscars’ monologue, told Scorsese, “Marty, I’ve got to tell you I love the first season of The Irishman.” It couldn’t compete in the 10 categories it was nominated for; it lost to films like Parasite, Once Upon a Time… In Hollywood, Little Women, Ford v Ferrari, and 1917.

But Scorsese himself was often given praise by other nominees and winners when he wasn’t the subject of memes. After Bong won best director—his third Oscar speech of the night—he took the time to individually praise Scorsese, which led the entire room to give Scorsese a standing ovation.

“When I was young and studying cinema, there was a saying that I carved deep into my heart, which is, ‘’The most personal is the most creative,'” Bong said. “That quote was from our great Martin Scorsese.”

And while Roma had an anti-Netflix bias narrative attached to it, which—along with other factors, such that it was a non-English film in black-and-white and was a slow and intimate story—might have contributed to its best picture loss to Green Book last year, the anti-Netflix narrative doesn’t seem to have necessarily hurt Netflix’s chances this year. (Of course, that’s not to say that an anti-Netflix bias still doesn’t exist among some members of the Academy.) This year at least, it appears that while those Netflix films had its fans, the Academy rewarded films that had more traditional distribution. But as was the case with the Emmys, it’s probably only a matter of time before the streaming takeover goes into full effect.