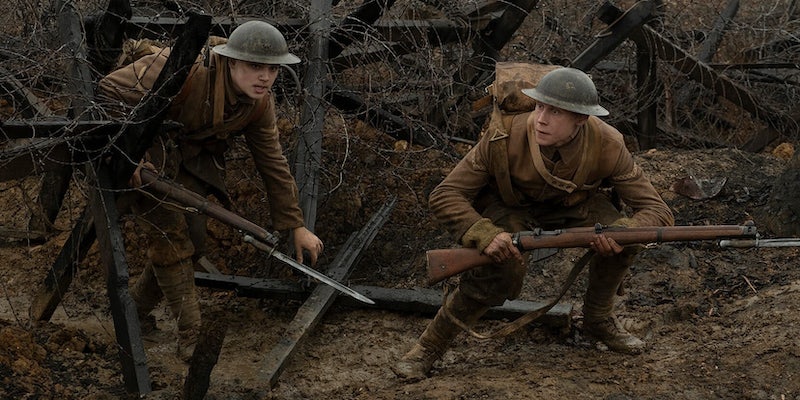 Review: ‘1917’ is a stunning journey through a single day in World War I

Immersively filmed as one continuous shot, Sam Mendes' '1917' is a stunning cinematic achievement.

1917 follows a casting convention we saw in Dunkirk: lesser-known actors in the lead roles, with more famous faces playing officers in the supporting cast. In this case, it’s Dean-Charles Chapman and George MacKay starring as Lance Corporals Blake and Schofield, a pair of young men sent on a terrifying mission into enemy territory. Traveling on foot, they must deliver a message to a battalion on the other side of No Man’s Land. If they fail, 1,600 men will die, including Blake’s brother.

Loosely based on the WWI experiences of Sam Mendes’ grandfather Alfred, 1917 is a fictional tale co-written by Mendes and Scottish screenwriter Krysty Wilson-Cairns (Penny Dreadful). The level of research and finesse, particularly from a production design perspective, is immediately impressive. We travel through trenches of napping and mud-spattered soldiers as Blake and Schofield go to pick up their orders, the camera bobbing and weaving through the ranks until it’s time to clamber up into the empty battlefield, a desolate hellscape where you can practically smell the bloated corpses and stagnant water. We go from bomb craters to the bucolic French countryside to abandoned towns, carefully paced for a wide range of emotional and visual tone. A particularly stunning moment arrives in the second half, after nightfall where pitch darkness gives way to a jumble of flames and blinding floodlights, transforming a ruined village into a chaotic vision of dancing shadows.

There’s a tendency among filmmakers to illustrate the grim drudgery of war with a relentlessly grey color palette, but while 1917 is unavoidably muddy, it’s shockingly vibrant as well. A two-hour march across WWI battlefields might suggest a certain visual monotony, but Mendes choreographs everything with precision. The real-time cinematography allows us to linger and digest our surroundings—the derelict war machines, the fallen cherry trees, the particular texture of the loam in the trenches—before whipping us off to a fresh location. Much of the time we’re watching an action thriller, but instead of the fast editing we’re used to seeing post-Bourne Identity, Mendes caters to short attention spans with changes in color and light, and in the emotional peaks and troughs of the two leads.

Oddly enough, Mendes and Deakins’ goal was to make audiences forget it’s all one continuous shot. It’s a tricky little paradox because you’re potentially better off not knowing the main technical conceit, but you can’t really review the movie without discussing it. Any film of this size is already a fine-tuned machine with hundreds of moving parts, but those parts can be paused and reset to film individual lines and scenes again and again, with single shots eventually cut to last a few seconds each. Mad Max Fury Road (which has a surprising amount in common with 1917) was famously edited down from 480 hours of footage, resulting in a two-hour movie with 22.5 cuts per minute. So it’s not just the visual experience that’s different here, it’s the entire method of filmmaking.

Obviously, 1917 wasn’t actually filmed in one take, but single shots would last several minutes, with camera operators running and driving through crowds of extras and carefully timed explosions, all while focusing on the emotional journey of the two protagonists’ descent into abject exhaustion. It sounds a bit like stage work, which explains the casting choices. Chapman and MacKay both have theater experience, supported by seasoned stage actors like Benedict Cumberbatch and Andrew Scott (a standout cameo) in the secondary cast. Mendes, of course, started his career as a theater director in the UK, helming high-profile productions of Oliver! and Cabaret.

For all this talk of technical complexity, the final product is pretty simple. Our heroes are a pair of average but sensitively portrayed young men, pushed to the brink by a grueling mission. The story requires no historical background knowledge to understand. Thematically, it’s very familiar, pitting salt-of-the-earth enlisted men against impossible odds and posh commanding officers. Like many war movies, it’s a protracted excuse for men to be extremely sentimental. And the action sequences, as you’ll know from Mendes’ work on the Bond franchise, are stunning. An effective example of using wartime violence for a nail-biting thriller without turning it into glossy entertainment.