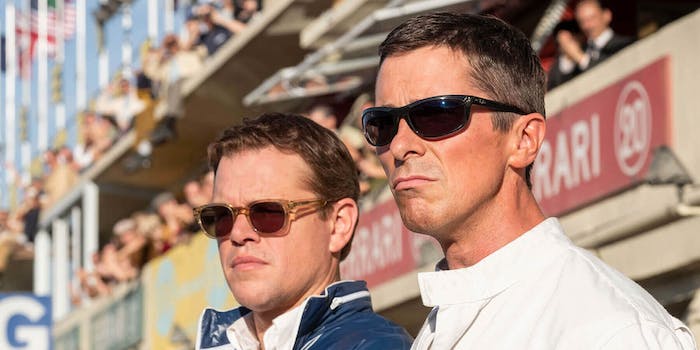 Another film about an outsider genius going up against conservative 'suits'? Say it ain't so.

Aimed at the heart of Baby Boomer dads, Ford v Ferrari boldly positions the Ford Motor Company as underdog heroes. Sure, the boss Henry Ford II (Tracy Letts) is kind of a buffoon. Sure, the two leads are constantly beset by “suits” who undercut their every move, just like every other film of this type. But in the end, we still have to swallow the idea that the Ford corporate behemoth deserves to win at any cost, both financially and in terms of dirty tricks against competitors.

Matt Damon and Christian Bale star as Carroll Shelby and Ken Miles, the designer and driver behind Ford’s first attempt to win the grueling 24-hour race at Le Mans. Shelby is a charismatic ex-racer with a head for business, while Miles is your quintessential loose-canon genius with a temper. (Since Shelby is portrayed as a dependable workaholic with no personal life, despite having had seven wives in reality, I’m also taking Miles’ characterization with a pinch of salt.) “He’s difficult, but good,” remarks one executive to another, just in case we didn’t get the message from the 15 other scenes where Ken Miles antagonized everyone before proving his worth behind the wheel.

Directed by James Mangold and written by Jez Butterworth, John-Henry Butterworth, and Jason Keller, Ford v Ferrari uses a well-trod formula to introduce the highly specialized world of racecar engineers and drivers. It helps that the central rivalry is pretty simple. In the early ’60s, Ferrari dominated Le Mans. Ford only competed in NASCAR events, but after a dispute with Ferrari, Henry Ford II decided it was time to crush the opposition in international racing. This meant building a new team and car from scratch, which is where Shelby and Miles came in. They’re our route to accepting Ford as plucky underdogs because otherwise, this is a story about a petulant CEO pouring millions into a vanity project to destroy a smaller, more artisanal rival (Ferrari) and rebrand Ford’s stuffy image to compete with sexier European manufacturers.

Miles and Shelby are motivated by the thrill of the sport and the satisfaction of building a winning car, bucking against constraints laid down by a smarmy Ford executive (Josh Lucas). At one point, they outwit the company men by sticking pieces of wool onto a prototype car, defeating the computer that Ford’s suit-wearing nerds use to measure wind speed. It’s a scene tailor-made for Boomer dads. Thus, Ford v Ferrari achieves a classic underdog vs. corporate overlords conflict, while still basically telling a story about corporate overlords triumphing over the little guy.

We’ve seen this kind of set-up before, right down to Caitriona Balfe’s role as Miles’ supportive wife Mollie. But in the crowded subgenre of period films about offbeat geniuses going up against The Man, this one requires more prior investment than, say, the joyfully energetic Elton John movie Rocketman. The interpersonal drama is too sketchy and formulaic to carry the film on its own, and Christian Bale seems to be channeling a broad Hugh Laurie character with a Birmingham accent.

Considering Ford v Ferrari’s premise—a pair of middle-aged white men with a religious passion for sports cars—you can easily guess the target audience. It’s not one of those situations like Phantom Thread, where a unique artistic vision transforms a niche lifestyle into something universally compelling. Ford v Ferrari was made for people who love cars, and it will suspend disbelief to cheer on Ford Motors as they succeed through—let’s face it—the sheer force of money. We root for Shelby and Miles, obviously, but it won’t escape your notice that Ford’s other teams are very nearly as good. You need to be convinced that it’s an act of rebellion to drive a car that doubles as a marketing ploy for a corporate machine, as long as you win on your own terms.

Aesthetically, Ford v Ferrari often feels like one of those nostalgic commercials for the sepia-toned history of a famous brand, like the misty-eyed ads you see for Jack Daniels. Shelby and Miles clink vintage Coke bottles after settling an argument with a fistfight. Ray-Ban shades are everywhere. In this particular bubble of 1960s America, the only societal conflict is Miles’ struggle for creative freedom on the racetrack, with the lone female character consigned to looking worried yet supportive in the background. There are certainly no pesky environmentalists meddling with the macho pleasure of gunning the engine on a gas-guzzling car.

If not for the genuine thrill of seeing the racing scenes on a big screen, I’d categorize this as a solid film for airplane viewing. Nothing intellectually or emotionally challenging, and a plot you can predict three steps in advance because you’ve seen it all before. Car dads will be satisfied, but Ford v Ferrari doesn’t really make a compelling case for anyone else.