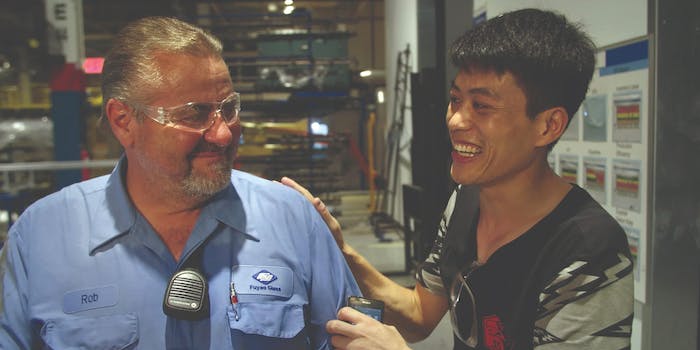 The directors are given nearly unlimited access to document the inner workings of Fuyao Glass America.

Part of the awe of watching American Factory is the dawning realization of just how much access directors Steve Bognar and Julia Reichert had while making it. Cameras are everywhere, not necessarily from a quantitative standpoint, but rather in the scope they cover. The documentary shows just about every aspect of automotive glass company Fuyao Glass America, from the factory floor all the way up to the boardroom.

That access is key to telling the company’s story. But as American Factory chronicles the first few years of Fuyao Glass America and how it affects its American and Chinese workers, it also reveals more complex issues at hand than two different ideals clashing in one workspace.According to production notes provided to critics, Fuyao Glass Industry Group founder, chairman, and CEO Cao Dewang originally wanted to commission a film about launching a Fuyao factory in the U.S. Bognar and Reichert refused to make a commissioned film but agreed on a deep-dive documentary.

American Factory follows the lives of several employees of Fuyao Glass America—which opened in Moraine, Ohio in a General Motors plant that shut down in 2008—from low-level workers all the way up to Dewang. (It’s the same plant that Bognar and Reichert previously filmed for the Oscar-nominated documentary short The Last Truck: Closing of a GM Plant.) It starts off slow, but as it eases its way into the very fabric of Fuyao Glass America, multiple stories emerge that seem destined to clash, as coworkers have different perceptions of what they need to do on the job.

The board is looking to make more money, but it also has to fulfill Dewang’s demands even when they don’t make sense to his American employees. Early on, Dewang wants a massive door moved so that it’s facing a different direction, something that will cost tens of thousands of dollars to fix. Some of the Chinese workers think their American colleagues are lazy. They’re resentful that American workers won’t work more overtime like they often do. Their superiors teach them to take advantage of American values and ways of thinking.

Many of the American workers want safe working conditions and a living wage. While they’re largely grateful to be working again, they’re doing it at a massive pay cut; one woman notes that while she made $29 an hour at GM, she’s only making $12 an hour at Fuyao Glass America. They’re being pushed to make more than is possible, have one person do the job of several people, and risk injury or death. When some of the American workers try to unionize, things get ugly.

The amazement of what Bognar and Reichert were able to capture in American Factory grows with each passing scene, while showcasing exactly why Fuyao Glass America needs a union in the first place: The same place that claims to be your family (and why do you want to put a union between that?) will easily dispose of you for trying to form a union and might one day replace you with machines.

In multiple instances, managers and bosses openly discuss that they need to put an end to the union talk, with Dewang threatening to shut down the factory if the workers unionize. Someone directs a casually threatening joke toward Sen. Sherrod Brown (D-Ohio) for publicly supporting the union efforts during a ribbon-cutting ceremony. (Only one scene in American Factory was secretly recorded by employees: a mandatory meeting with a union buster hired by Fuyao Glass America as a “consultant.”)

Even as many of the higher-ups try to pit employees against one another, American Factory also highlights the camaraderie among workers. Their values might differ, but they’re working toward similar goals. They hang out outside of work, share information about their families, and spend holidays together. American managers who are sent on a business trip to Fuyao’s flagship location in China try to incorporate what they’ve learned to help manage their own workers. Employees sometimes feel out of place, but the focus is much more about how they bond, even when they’re at odds with one another.

Ultimately, American Factory presents Fuyao Glass America as a double-edged sword. It breathed life into an Ohio town still hurting from the recession, but this revitalization came with crippling compromises for many workers—compromises that the billionaires in charge were all too willing to make.

American Factory is screening at the Tribeca Film Festival.