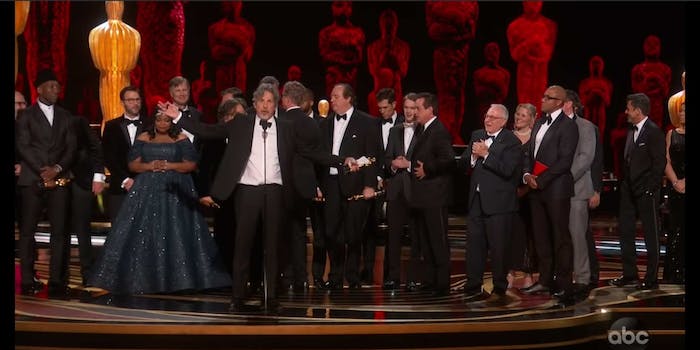 Twitter is upset at the unbearable whiteness of 'Green Book.'

Green Book’s Best Picture win at the Academy Awards last night led to a myriad of reactions, whether it was over producers unnecessarily dragging Carrie Fisher into their moment of glory or over the exhaustive list of controversies the movie has been mired in.

Probably the top criticism, though, was the film’s white-savior narrative and what it meant the Academy celebrated it. There were many Black-centered movies made by Black directors and producers that were worthy of a win—If Beale Street Could Talk, BlaKkKlansman, Black Panther. However, that the Academy voted for Green Book made it obvious that its members aren’t OK with just any kind of Black movie, but one where the focus is on a white hero.

The voters of the Oscars are 94% white, voting on stories and experiences they can’t fully understand.

Greenbook was a slap in the face to many. A white savior film that dares to try and encapsulate Black existence through a white man’s eyes. A shame. https://t.co/hxVN6ZyPFv

I think Green Book and BlacKkKlansman both winning last night is… a pretty good depiction of the precipice we stand upon in white-landia. Yay! We recognize other stories now! But gosh darn it all, we still want to be the heroic centre of any societal transformation. #DoBetter

Green Book was not for Black people.

It was to make white people feel good about doing little to stop racism beyond the interpersonal.

Also, the other movies were better.

So a movie called “Green Book” (which doesn’t actually go into the necessity/history of the Negro Motorist Green Book) & is written by a white guy as a glorified White Savior tale about his dad wins Best Picture. Sounds about White.

I didn’t watch the Oscars because reasons.

But in 2019, they still giving highest praise to the “Lovable Racist/Happy Darkie” movies.

From GONE WITH THE WIND to GREEN BOOK, wypipo (and those who want to be) love historically inaccurate white supremacist propaganda.

Green Book was the safest Black film the Oscars could pick.

But the gag is it's not a Black film. It's just carried on the back of an amazing performance by a Black actor portraying a extraordinary historical character.

Everyone in #Publishing mad about #GreenBook beating out actual Black movies by Black people staring Black people, keep that same energy when you get to the office tomorrow.#Oscars #Oscars2019 pic.twitter.com/eM0NdxTAvo

The image that best encapsulated the film’s perspective was when its mostly white crew went to accept their award for a movie about living Black in Jim Crow’s America.

a movie about race relations and how we can all love each other … look at this stage pic.twitter.com/nMwD12lLZ1

It eventually spiraled into a meme comparing Green Book to white allies who “don’t see color” and are all about Black rights as long as it’s convenient.

Green Book stopped you for a broken taillight https://t.co/vqty0Dl9vo

Green Book wants to know where you’re *really* from.

Two of my favorites

Green Book is sorry it called the cops on you, but you were using a charcoal grill in a public park “which is explicitly against the rules.”

Green Book wore blackface in college, and they are devastated that you found out.

Green Book moved to this neighborhood for its vibrance and culture and also calls the police at least three times a week.

Green Book‘s Best Picture win especially felt like a slap in the face after many great Black talents took home prestigious awards, including Regina King for Best Supporting Actress and Spike Lee for Best Adapted Screenplay. Mahershala Ali, who played the role of pianist Dr. Don Shirley in Green Book, also won Best Supporting Actor. But that victory feels like an added wound given members of Dr. Shirley’s own family have repeatedly claimed he was misrepresented in the film.