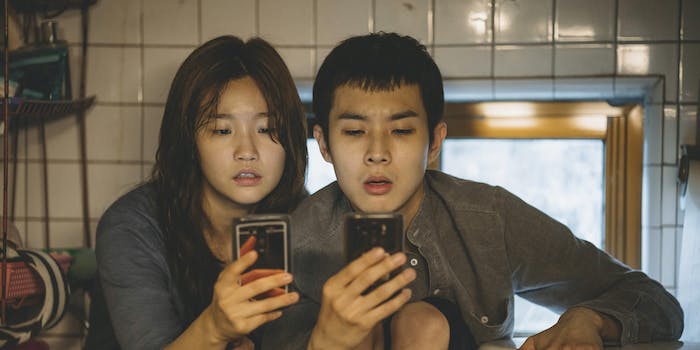 ‘Parasite’ makes history at the Oscars

Parasite just won big at the 2020 Oscars, disrupting what was otherwise a very predictable ceremony. The Korean-language drama was a front-runner alongside 1917, but it was still a genuine surprise to see it win four Oscars: best picture, best director, best original screenplay, and best international feature film. It’s the first South Korean movie to win an Academy Award.

You could detect a real sense of excitement in the audience as director Bong Joon-ho went up to collect more and more statuettes. This year’s nominee shortlists were pretty conservative, celebrating long-established white male filmmakers and traditional “Oscar movies” that encouraged a sense of macho American nostalgia (Joker, Once Upon A Time In Hollywood, The Irishman, Ford v Ferrari). The Academy was also criticized for mostly nominating white actors and creators, and sidelining female filmmakers.

Parasite was the Academy’s only major chance to shake things up, and more importantly, it’s a truly great movie. Universally praised since its first screenings at film festivals last year, its momentum just keeps growing. As a satirical drama about life under capitalism, its subject-matter clearly resonates. Set in present-day Korea, it tells the story of a poor family who scam their way into the lives of a wealthy family who live in a beautiful house, creating a tragicomic clash. Like Bong Joon-ho’s other work, it showcases impressive technical skills alongside a unique mix of absurd humor and dark, insightful political commentary.

The cast and crew of Parasite have been a big hit during awards season, especially Bong Joon-ho’s witty and charming acceptance speeches and interviews. One particular favorite was when he referred to the Oscars as a “local” film festival.

While Parasite isn’t necessarily as well-known to English-language audiences as something like Joker, its Oscar success was (just like any Oscar winner) partly due to Bong’s popularity in the industry. His last two movies, Snowpiercer and Okja, were predominantly English-language releases featuring A-listers like Chris Evans and Tilda Swinton, meaning he was already familiar to Academy voters. During his acceptance speech for directing, he singled out a couple of his fellow nominees, both true Hollywood insiders: Martin Scorsese, who influenced Bong’s work, and Quentin Tarantino, who recommended Bong’s earlier films to American audiences.

It may not always seem like it, but one of the main purposes of the Oscars is to introduce good movies to a wider audience. Parasite‘s four decisive wins will do just that. While the film has enjoyed word-of-mouth success and months of acclaim from film buffs, Bong Joon-ho isn’t a household name in America. Thanks to this historic win—which incidentally means that Bong Joon-ho won as many Oscars as Disney this year—lots of people will get to discover his brilliant filmography for the first time.