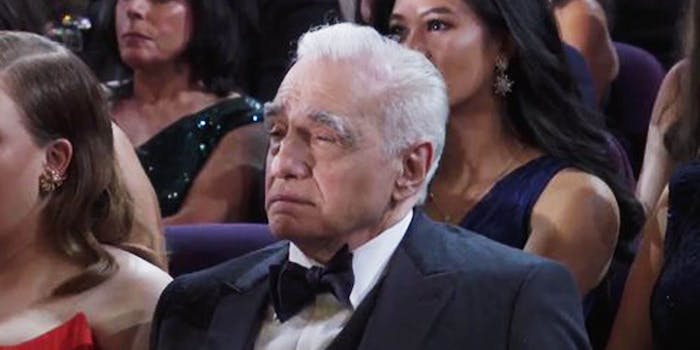 The rapper won an award for the song in 2003, but did not show up to the ceremony.

Rapper Eminem surprised audiences with a performance of his Oscar-winning song “Lose Yourself” during the 92nd annual Academy Awards on Sunday, for the upcoming 18th anniversary of his 2002 motion picture 8 Mile. But not everyone was taken with the performance—and that included acclaimed director Martin Scorsese, whose film The Irishman was up for a total of 10 nominations

Preferencing Em’s performance, Lin-Manuel Miranda introduced a segment about the importance music plays in films, rolling a clip featuring notable movie soundtrack hits such as “Don’t You (Forget About Me)” by the Simple Minds (from The Breakfast Club), “Moon River” performed by Audrey Hepburn (from Breakfast at Tiffany’s), and “Danger Zone” by Kenny Loggins (from Top Gun), among others—before honoring Eminem.

Most stars in attendance seemed to enjoy Eminem’s performance, as A-listers in the front row could be seen singing along and bobbing their heads to the song.

However, others, such as Anthony Ramos, Kelly Marie Tran, Idina Menzel, Billie Eilish, and Martin Scorsese, in particular, seemed confounded by the vintage rap track.

“Martin Scorsese made a marathon movie in The Irishman but is passing out to an Eminem performance,” tweeted Chamatkar Sandhu (@SandhuMMA). Others seemed to have similar observations, after witnessing Scorsese’s apparent reaction to Eminem.

Martin Scorsese made a marathon movie in The Irishman but is passing out to an Eminem performance! #Oscars pic.twitter.com/WZ5DEcVmm5

Martin Scorsese and his daughter reacting to Eminem.

Plenty of others, on the other hand, had quips and memes about Scrcece’s nodding off. “Vibe check,” joked entertainment reporter Karen Han.

Martin Scorsese losing himself in the music, the moment pic.twitter.com/j62mGpOmIQ

remember when Eminem had more Oscars than Scorsese

why is eminem performing?? what is the connection. is it just to give us reaction shots of Scorsese reconsidering the life choices he’s made that led him here

Some compared Scorcese’s reception to the Eminem performance to his apparent lack of enthusiasm towards Marvel movies:

Love it or hate it, the performance by Eminem was notable in that he initially snubbed the ceremony in 2003—in which he ultimately won an award for “Lose Yourself,” which he finally performed in 2020. Just goes to show that time is a flat circle?