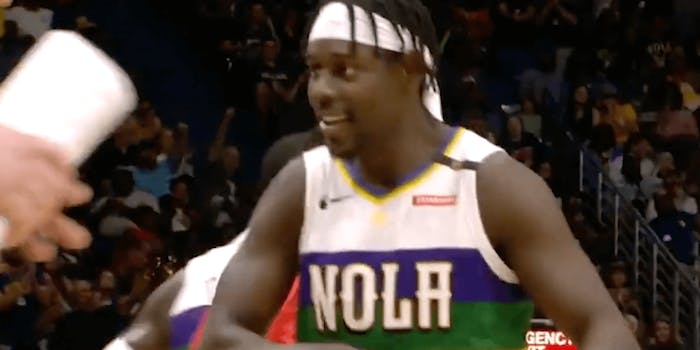 How to watch the Pelicans vs. Nuggets Christmas Day matchup

Besides Zion's health, the other big story will center around the availability of Jrue Holiday, who's reportedly available via trade.

The talented-but-young New Orleans Pelicans will take a “mile-high” trip to take on the Denver Nuggets on Christmas Day at the Pepsi Center.

Zion Williamson, who has yet to play a game this season, will likely dominate much of the sideline conversation. The Duke product has remained out since his surgery to repair a torn right meniscus. Pelicans executive David Griffin and head coach Alvin Gentry have elected to keep Williamson under wraps, and he likely won’t play more than 20 games this season, if he suits up at all.

Zion Williamson out here getting shots up before tonight's game against Golden State pic.twitter.com/aNDYRefemZ

New Orleans, though, already has two stars in defensive stalwart Jrue Holiday and Brandon Ingram, who’s turned into one of the league’s top scorers. The fourth-year player ranks 12th in the NBA with 25.3 points per game.

Denver hasn’t played up to expectations, given that he just came off a strong 2018-2019 season. But they still sit second in the Western Conference, again led by star center Nikola Jokic. The ridiculously skilled Serbian, who’s rebounded nicely after a poor start, is currently averaging 17.3 points, 10.1 rebounds, and 6.8 assists per game.

New Orleans Pelicans vs. Denver Nuggets: What to watch for

The other big story with the Pelican, other than Zion’s continued absence, centers trade around the availability of Jrue Holiday.

Yet what that also means is Jrue Holiday is indeed available via trade, league sources say. It would surely cost a significant amount to pry him away from the Pels, but this is a notable change in status given how unavailable Holiday was to interested teams last season

The 29-year-old guard would be a tremendous addition to any team as a second or third scorer, depending on the team’s makeup, and would be an instant upgrade for any team defensively. However, it would be interesting what he would bring in return, versus keeping him to team with Ingram and a healthy Williamson.