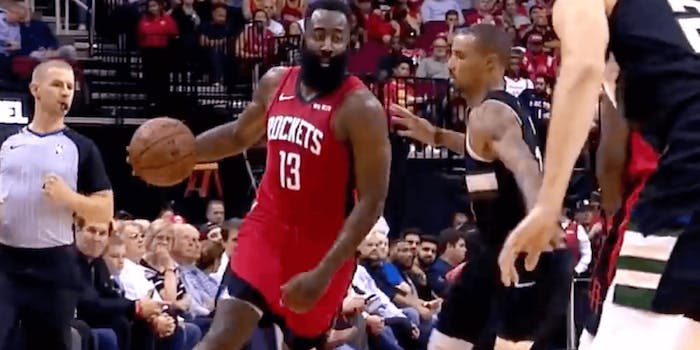 How to watch the Rockets vs. Warriors Christmas Day matchup

Do you reckon the Rockets remember the Warriors knocked them out of last year's playoffs?

The Houston Rockets look to exact revenge for Christmas, on a Golden State Warriors squad that’s definitely not at full strength, but playing at its new home: Chase Center in downtown San Francisco.

Even with the Rockets’ addition of Russell Westbrook, James Harden continues to be his usual completely unstoppable self, averaging 38.5 points per game. He’s averaging an incredible 13.8 three-point attempts a game, and hitting 36 percent of them.

The crazy thing is that James Harden will actually use these moves. (via @nba) pic.twitter.com/CkCkxt2Vu2

To further illustrate his offensive dominance, on December 19, Westbrook scored 40 in a win over the Los Angeles Clippers. It was the Rockets’ 90th 40-point occasion in the last 10 years. Harden has 87 of the other 89.

Houston won’t be playing the Golden State team people are accustomed to seeing, with Stephen Curry and Klay Thompson out with injuries, but don’t expect the Rockets to cut them any slack.

Houston Rockets vs. Golden State Warriors: What to watch for

The evolution of Draymond Green has been interesting, if nothing else. Without the shooters around him—the injured Stephen Curry, Klay Thompson, Andre Iguodala, off-to-Brooklyn Kevin Durant—Green is still a very good player, but not the All-Star level talent he was with the great (if even unusual) spacing he could play with, both offensively and defensively.

Draymond Green with the pass of the year! pic.twitter.com/NyHE8hEa0F

It’s funny now, but watch next season. Green will be on something of a revenge tour.